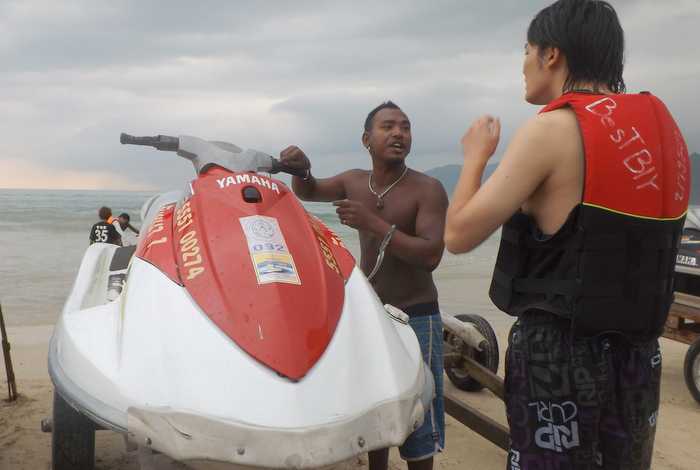 PHUKET: Patong’s management system for jet-skis will be the model for the rest of Phuket, the Royal Thai Navy announced yesterday.

“Zones separating swimmers from jet-skis will be applied in Patong first, and then at other beaches on the island,” said Vice Admiral Sayan Prasongsamrej, commander of the Royal Thai Navy’s Third Area Command.

“The order has already been signed off by Phuket Governor Nisit Jansomwong with the approval of local government bodies.”

Jet-skis are to remain in the water and not on the beach during working hours. The one exception will be a jet-ski marked with a Red Cross symbol, which will be used for rescue operations, V/Adm Sayan said.

The plan for jet-ski zones and swimming areas has been modified since it was announced earlier this month by Phuket Marine Office Chief Phuripat Theerakulpisut (story here).

There will now be three swimming zones marked with buoys, each stretching 500 meters along the beach and reaching 150 meters into the sea, explained V/Adm Sayan.

The 300 meters of sand between the swim zones will provide beach access for jet-skis and speedboats.

Phuket’s leading authorities have come under mounting pressure to rein in jet-ski operators, who remain free to continue renting out jet-skis at the island’s beaches, while all other businesses on the sands have been torn down and banned.

The latest call to regulate the jet-ski cowboys came at the American Chamber of Commerce (AMCHAM) forum, which focused on the future of Phuket’s marine tourism industry.

No substantial progress has been made in regulating jet-skis or protecting tourists from the variety of scams jet-ski operators are known to employ, said Martin Carpenter, British Honorary Consul for Phuket.

“We now have another governor to speak to, and, unfortunately, the first subject is going to be jet-skis,” he told the forum on November 21 (story here).

“What is going to be done about it? I believe absolutely nothing, at this moment. Unfortunately, there is no current evidence that anybody in government, except for here [at AMCHAM], is really taking this issue as seriously as many people want.”

The permission was granted on November 4, despite the death of a Russian tourist on a jet-ski at Patong and several dangerous encounters with jet-skis and their related equipment at Nai Harn and Surin beach – all in that same week (story here).

Mr Phuripat explained to Phuket Governor Nisit Jansomwong that jet-ski operators could stay as long as they followed the new rules brought into effect on October 1.

If they failed to follow the rules, they faced the possibility of an island-wide ban on all jet-skis, he said.

However, the ultimatum rang hollow, as it was Mr Phuripat’s second “last chance” warning. He had earlier vowed to revoke the permits of any operators whose businesses or jet-skis were involved in any untoward incidents – that warning came ahead of the notorious week of death and mishaps involving jet-skis this month.

The notorious reputation of jet-ski scams in Thailand, mainly of tourists being scammed by corrupt jet-ski operators, also prompted the Tourism Authority of Thailand (TAT) to announce a plan in August to work with the Department of Tourism, under the Ministry of Tourism and Sports, to tackle the problem.

The move followed the NCPO issuing a command to clean up and regulate the jet-ski business operating at many of Thailand’s major beach destinations.

Jet-ski scams have been damaging the reputation of Thailand’s tourist sector for some time. Most often, having returned a rented jet-ski, tourists are told that they have damaged it and have to pay a hefty repair fee (up to 100,000 baht in some cases) for damage and scratches that were already present, reported the TAT.

“These large fines are often extracted under the threat of violence, and many tourists have taken the step of lodging complaints with their national embassies after being scammed by jet-ski operators,” the TAT report explains (story here).

To better gauge public opinion on whether jet-skis should stay, the latest Gazette poll asks readers: “Should jet-ski operators be allowed to operate on Phuket’s beaches?”

Vote at right to make your voice count.

Phuket man robbed of B1mn worth of amulets

Phuket King’s Cup: The countdown is on (video)