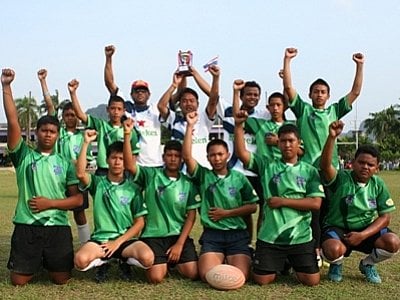 PHUKET: WHILE Phuket Lomas under 13 rugby team was proving itself on the international stage in England a depleted under 17 squad traveled to Krabi for the National 7’s regional play-offs recently.

Played at Krabi’s home pitch in Ao Luk, the Lomas faced their regional rivals Krabi RFC and Surat Thani RFC to decide who would progress to the National finals which will be held in Bangkok this September.

Krabi were favorites to advance mainly because of the Lomas not being able to field their full team, but the Phuket team showed their defiance in face of the odds and ran in two unconverted tries either side of half-time to win 10-0.

Resistance from Surat Thani was limited and the Lomas easily dispatched them by a score of 24-0 to set up a deciding game against Krabi once more.

Lomas were first to strike with a converted try, but Krabi replied just before the half ended with a score of their own that was not converted to send the teams into the break at 7-5 to Phuket.

Krabi hit the ground running after the restart and a converted try put them ahead 12-7. Krabi kept the pressure on and with only minutes remaining the Lomas turned over possession near their own line. The ball was released to Lek in the center who found a gap in the Krabi line and sprinted the entire length of the pitch for the winning try.

A score of 14-12 gave the Lomas the Regional rugby 7’s title and an opportunity to challenge for the U-17 National championship later this year.