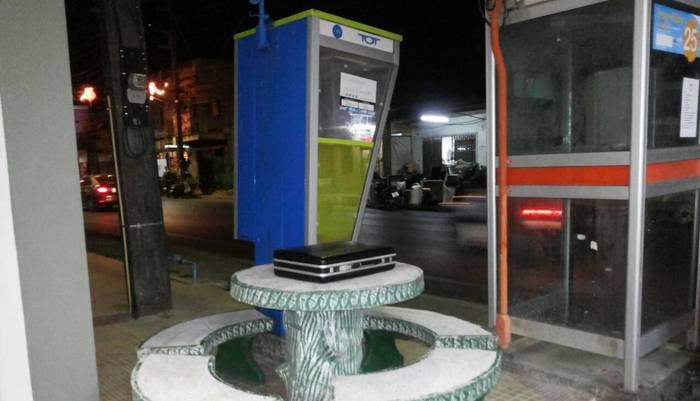 PHUKET: A frightened supermarket worker urgently called police after discovering an unattended briefcase on a table in front of the store, only meters from Cherng Talay Police Station, last night.

“The member of staff from Big One supermarket on Srisoonthorn Road called 191 at about 8pm because they suspected that the briefcase might contain a bomb,” said Lt Chanasin Prateepnathalang of the Cherng Talay Police.

Police rushed to the scene and found the suspicious, shiny black briefcase in the middle of a table in front the supermarket – just 300 meters from the police station.

“While we were deciding what to do, a local resident appeared and said he had seen a film production team shooting in the area earlier that afternoon. He thought that they might have left it behind,” said Lt Chanasin.

Police took the mystery briefcase into custody, but it wasn’t until this morning that the offending item was returned to its rightful owner.

“An elderly gentleman came to the station this morning to claim the suitcase,” Lt Col Narong Buakhong told the Phuket Gazette earlier today.

“I gave it to him, but I can’t remember his name… I still don’t know what’s inside the briefcase,” he admitted.