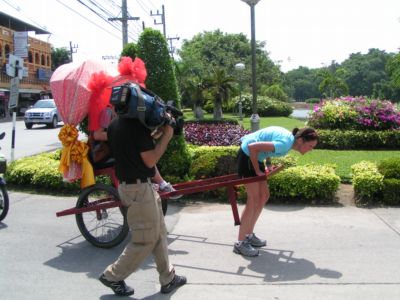 PHUKET: At least four pairs of contestants taking part in a travel documentary are racing around Phuket using various forms of transport today.

One of the challenges that faced the contestants was to pull each other through Phuket City in the midday heat using rickshaws as they searched for “King Rama V Park”.

The contestants pictured here made “four wrong turns” and held up traffic while a camera man and a sound engineer followed them in a songtaew (wooden bus with benches). A policeman on a motorcycle also followed the contestants and crew to “ensure their safety”. The policeman told the Gazette that even though he could easily have told them how to get to the park, he had been ordered not to give directions to the contestants.

The Gazette caught up with production crew members at the park, but despite holding up traffic and creating quite a spectacle with brightly decorated rickshaws being pulled by very hot and stressed-looking farangs, they refused to make any comment on what they were doing, except to say that they were making a “random travel documentary”.

Rage on the road turns fatal