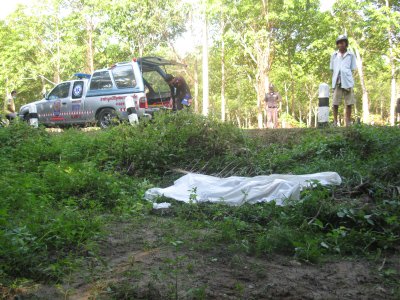 PHUKET: The body of a Burmese man was found on a Phuket palm plantation yesterday morning with a half-severed head and intestines spilling out.

Thalang police were informed of the gruesome discovery at about 8am. The body lay in Palm Anchalee, just south of the Heroines’ Monument and adjacent to the offices of the Phuket Gazette, off Thepkrassatri Road.

The victim, identified by a document on the body as “Yoe”, age 37, was found face down with 11 stab wounds, police said.

According to the document, he lived in Rassada sub-district.

Near the body, police found the victim’s socks, a tobacco pouch and a hat.

Thalang Police Duty Officer Lt Patiwat Yodkhuan speculated that Mr Yoe may have known the killer, who tricked him into going into the secluded plantation behind Wat Tha Ruea and killed him.

Another scenario could have been that Mr Yoe was killed while trying to fend off robbers, Lt Patiwat said.

Kusoldharm volunteers took the body to Thalang Hospital for examination.