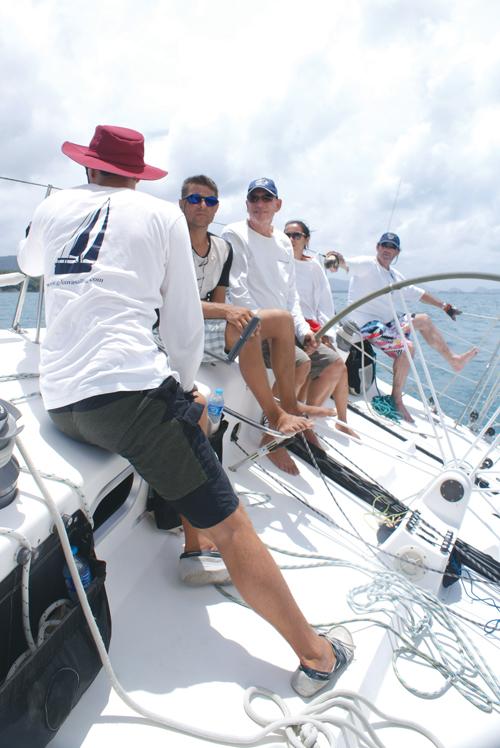 The first of the eight race series was proudly sponsored by ISS Security Services. After hearty breakfasts from the club restaurant and some of the best coffee on the island, sailors of nine yachts left the beach to compete on a course set around the beautiful Southern islands of Koh Bon, Koh Lon, North to Ao Makham and finishing back in Chalong Bay.

Under the watchful eye of Race Officer Chandran all yachts started at the scheduled time of 12:00, however, it appeared some of the racers were a little rusty with only three of the nine boat fleet anywhere near the line as the start signal sounded.

Hurricane and Moya Hin lead the fleet out of the bay and extended their leads on the upwind leg to Koh Bon. Some confusion over the location of some rigging equipment on Moya Hin resulted in a very slow spinnaker hoist that saw Babe closing in quickly after a very late start. Eventually sorting out their problems Moya Hin then extended to be clear winners in the racing class.

Hurricane sailed well to win the Multihull class with Moto Inzi in second and Nina, third. Although known as the “cruising class quite a battle developed between Series One winner Aqua and local favourite Fidji, helmed by sail-maker Ket Mangklaseranee, after several “close crosses and lead exchanges Aqua held on take first place by just under a minute with Fidji and Iruvai in second and third respectively.

A late afternoon squall and heavy rain failed to dampen competitors spirits as prizes of fine red and white wine were awarded by local Australian expat legend Phil Vidal. Race two is scheduled for Sunday, August 25, and all yachts are welcome to participate. The club is open daily and features a unique waterfront dining experience for visitors and members alike, for more information please visit acyc.asia.

Run like a girl… ahead of the rest – Triathlon Tips