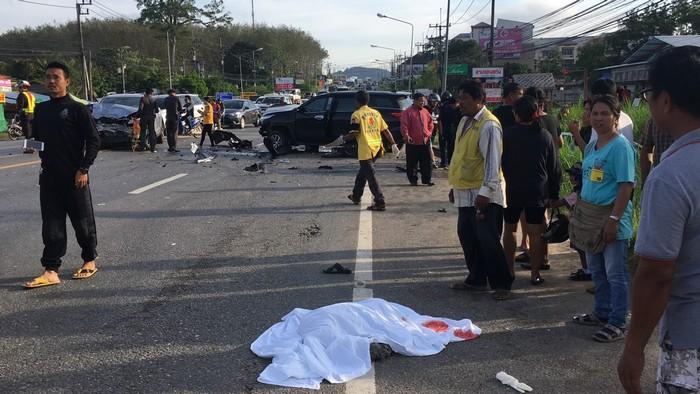 PHUKET: A 68-year-old man on a motorcycle was killed instantly this morning in a horrific 4-vehicle collision at 7am in front of the SuperCheap store near the Heroine’s Monument on the four-lane road to Pa Khlok.

According to police reports, witnesses said the motorcyclist swerved in front of a Subaru driven by Kornthip Kriangkra, 32, heading toward Pa Khlok. He was thrown into the air by the impact, landing in a crumpled heap several meters away.

When Ms Kornthip swerved to try to avoid the motorcycle, she collided head-on with a Toyota Fortuner heading toward the Heroines Monument, causing the Fortuner to spin out.

A Mitsubishi Pajero, which was tailing the Fortuner, drove into a roadside ditch to avoid the carnage ahead of him.

All three of the car drivers escaped relatively unharmed. Ms Kornthip was saved from serious injury by her car’s airbag, which deployed in the collision.

The drivers were taken to Thalang Police Station for further questioning to establish more details of the crash, and to determine whether any of them would face charges.