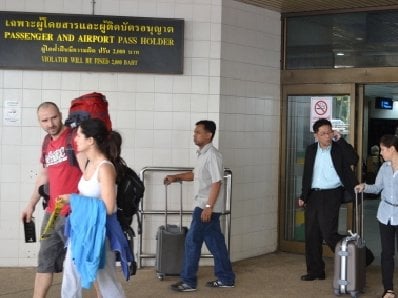 PHUKET: In the wake of Monday’s bombing at Moscow’s Domodedovo Airport, Phuket International Airport Acting Director Passakorn Surapipith has ordered his staff to be extra vigilant for suspicious items and people.

The Moscow blast, which was detonated in the arrival hall, killed 35 people and left more than 130 others in need of hospital treatment.

“We do not allow vehicles to park for long. After sending off passengers at the building entrance, the cars should be moving,” Flying Officer Passakorn said today.

“We also have announcements to remind passengers to keep their belongings with them at all times. Bags should not be left unattended and our officers are on the lookout for suspicious-looking people as well,” he added.

However, Mr Passakorn said it was unnecessary to have x-ray scanners installed in the arrival areas.

“The arrival halls are restricted areas that only passengers and relevant personnel can enter. People from outside are not allowed to enter [these areas],” he said.

“Passengers arriving in Phuket have been through security checks at other airports already, and I have faith in other airports’ security systems. So there is no need to install [extra] scanners,” he added.

The security boost is the first directive issued by Mr Passakorn, who became Phuket Airport’s acting director on Monday.

He was posted to Phuket from Airports of Thailand headquarters in Bangkok after the previous airport director, Prathuang Sornkham, was shipped out last Wednesday with immediate effect.

Mr Prathuang’s immediate transfer to Bangkok is pending an investigation into two Paraguayan nationals being allowed to board an outbound Emirates Airline flight without passports.