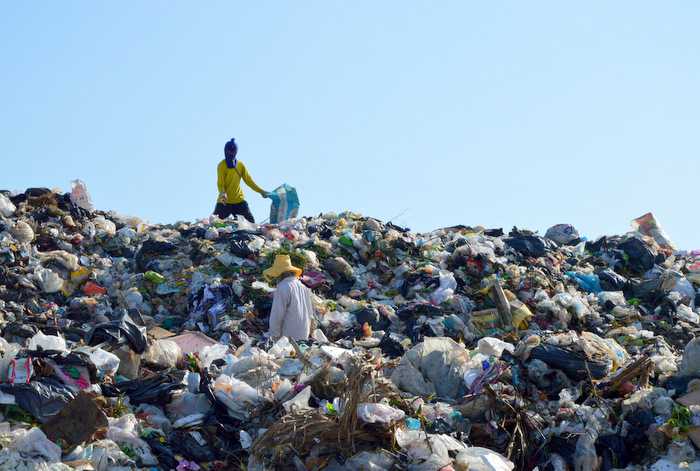 PHUKET: Officials have revealed a 127-million-baht budget to improve Phuket’s environment with plans to destroy nearly one million tonnes of trash at the landfill in Saphan Hin and overhaul the island’s drains.

Governor Nisit Jansomwong led a meeting at the landfill and incinerator site at Saphan Hin last week to discuss ways to relieve the overwhelmed site where trash has been accumulating for more than a decade.

“We have agreed to hire a private company to convert 1mn tonnes of trash into various types of fuel over the next three years, at 330,000 tonnes per year,” said Governor Nisit.

“We have not yet determined which company we will use, but we estimate the cost to be 67mn baht per year.”

The three-year plan will begin in next year, with the first 67mn baht coming from the 2015 fiscal year budget, he explained. The subsequent two trash conversions for 67mn baht each will be taken out of the 2016 and 2017 fiscal year budgets, respectively.

“The million tonnes of trash that we will destroy has been there since 1992. We have never been able to get rid of it all,” Prachum Suriya, chief of Phuket City Municipality’s Environment Office, told the Phuket Gazette.

Local government officials over the past year have ramped up efforts to alleviate the island’s burgeoning waste problems.

In June, Phuket launched an initiative to ensure the separation of hazardous material from public trash, despite not having the facilities to dispose of dangerous materials (story here).

In September, Phuket City Mayor Somjai Suwansupana noted the island was struggling to deal with the volume of waste generated each day.

“Right now, we are just below the limit. We receive an average of 680 tonnes of trash per day. The capacity for our incinerator facilities is 700 tonnes per day,” she said (story here).

A third incinerator is also undergoing repairs and will not be back online until next year (story here).

At the meeting last week, officials also discussed the future improvement of the island’s drainage system.

“We will set aside 60mn baht of the 2015 fiscal budget to renovate drainage systems,” Gov Nisit explained.

“Pipes in Phuket City and Rassada will be connected in order to allow wastewater to flow better.”

The new underground pipe will run from near the Phuket Butterfly Park on Soi Phanieng, north of Samkong, to the road in front of Vachira Phuket Hospital on Yaowarat Road in Phuket Town.