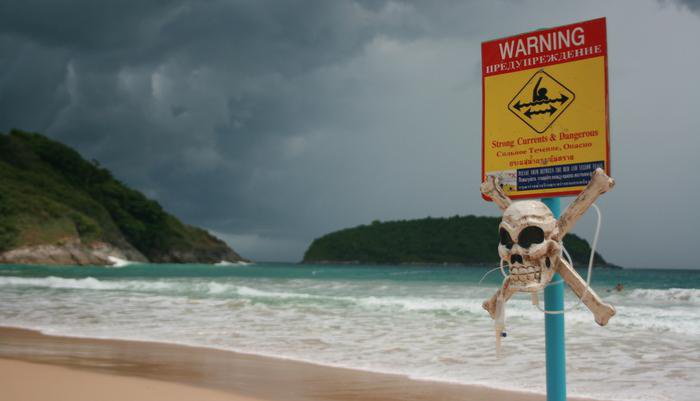 Without lifeguards on the beach, family members and beachgoers did their best to save Panya Lonraphat, a witness to the death told the Phuket Gazette.

“He was found and brought ashore by family [members] within minutes. Onlookers tried to assist with CPR [cardiopulmonary resuscitation] for half an hour, while waiting for the ambulance, yet it was too late, as he had tragically drowned and there were no lifeguards present,” said Mr Panya’s brother-in-law, Jacob Ritter.

“While politicians and suppliers continue to wrangle over a budget for lifeguards at Phuket beaches, another tragic drowning took a life at Phuket’s world-class Nai Harn beach. He was visiting Phuket to celebrate the recent birth of his niece.”

In response to the lack of essential lifesaving services on the beach, the victim’s family wrote an open letter to the National Council for Peace and Order (NCPO):

Each year, Phuket’s lifeguards save many swimmers in distress. However, annually, the lifeguard organization re-negotiates bids with the government and inexcusably during this time, zero guards are protecting the beach.

Surf season has already begun, putting many innocent visitors’ lives at serious risk. At an otherwise world-class tourist-friendly island destination, this is totally inexcusable, avoidable and a crying shame. People should feel safe enjoying the beach, regardless of contracts and budgets. In order to protect Thailand and Phuket’s image, guards need to be stationed on beaches all year long.

Therefore, the victim’s family respectfully urges General Prayut and the NCPO to correct this problem by ending the annual pattern. In using its power to expediently consider this urgent matter, we appreciate the government’s kind attention and genuine concern.

The island’s beaches have been without lifeguards since March 27, when the annual contract between the Phuket Lifeguard Club (PLC) and Phuket Provincial Administrative Organization (PPAO) expired (story here). With no party having come forward to bid on the 22-million-baht concession to sign the new contract, the cyclical issue of having Phuket’s beaches without lifeguards as the southwest monsoon season begins reared its head again.

Last year, the beaches went unguarded for a month after the PLC walked away from their posts over issues concerning the details of the contract (stories here and here).

Though the PLC had already agreed to a new contract before the death of Mr Panya, guards had not yet returned to the beach, as the contract is awaiting final approval.

“I am very sorry for the man who just passed away at Nai Harn. During this monsoon season, the beaches are very dangerous. Lifeguards should have been there,” PLC President Prathaiyut Chuayuan told the Gazette.

“We are still waiting for the PPAO to approve the contract, and all parties to sign it, so that we can go back to work,” Mr Prathaiyut said. “While lifeguards are not there, local authorities should be doing their best to take care of beachgoers. Many people have died already, including children. I do not want to see any more deaths.”

The PPAO expects to have lifeguards back on the beaches within the next week.

“I understand that these are dangerous time for people visiting the beach. However, we must adhere to official procedures. We will get lifeguards back on the beaches as soon as possible,” said Nararit Touyon, from the Tourist Department of the PPAO.