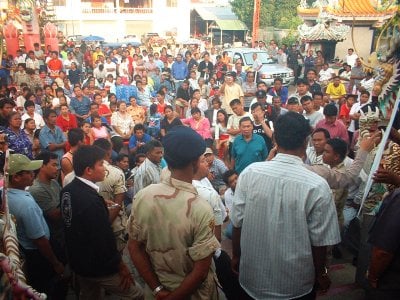 SAPAM: More than 200 people blocked Thepkrasattri Rd for half an hour yesterday evening as they protested against plans to make them pay rent on the land where they have lived for 15 years.

The rally was sparked by a February 17 visit to Moo 3, Tambon Koh Keaw by city officers, who told the residents they must now pay rent on the site – a former tin mine returned to state ownership when the concession to mine it ended.

Gen Suvit persauded the protesters to clear the road and move to the Sapam shrine to discuss their problems.

The Chief Administrator of Phuket Town District Office, Tawicha Chaithong, denied that the authorities are looking to evict the residents, as some of the protesters had claimed, but said the rent demand was in line with Prime Minister Thaksin Shinawatra’s stated policy of easing the problems of poor people.

“The officers will examine the problems in this area and present the results to the government in Bangkok, but the aim is to help,” K. Tawicha explained to the residents.

“If people are living on state land, they will have to sign a contract to rent the land, but once they do that, they can use the contract to guarantee a loan from the bank. This is in line with the government’s policy of encouraging people to turn their properties into capital.”

The protestors chose 10 representatives to meet officers at a later date to discuss their concerns, then the protest broke up.

Festival to give Andaman coast a boost