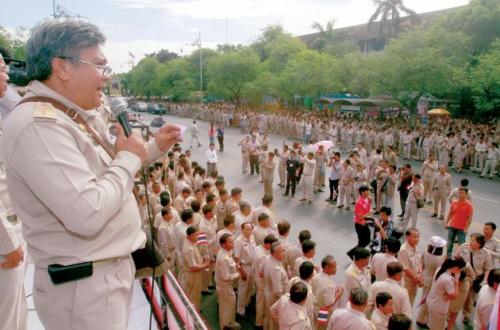 PHUKET: The Ministry of Interior (MoI) has set a deadline of January 20 for Governors of tsunami-affected provinces to submit applications for Thai nationality from an estimated 2,180 people who may qualify for nationality but who have not yet applied.

The estimate was arrived at after research conducted by local officials in June last year, as part of a drive to sort out the problem of illegal immigration in Thailand.

Minister of Interior Air Chief Marshall Kongsak Wantana said at Phuket Provincial Hall yesterday that 1,941 of these people live in Ranong Province, with the remainder living in Phang Nga.

Of the total, 620 are Sea Gypsies, mostly in Phang Nga, and the rest are people with no nationality who live in the area along the Thai border with Myanmar.

ACM Kongsak said, “Local officials who send us the names of people who want Thai nationality must ensure that these are genuine cases.

“There must be careful checks to make sure that nationality is not granted to those who do not qualify.”

He continued, “The deadline [for the provincial authorities to send the names of applicants to the MoI] is January 20. After that, anyone who does not have legitimate papers will be regarded as an illegal immigrant.”

These people will be rounded up and deported, he said.

Apparently no applications for nationality have been received from Phuket, Krabi, Satun or Trang, the other four provinces affected by the tsunami.

Get your smart card: Mayor