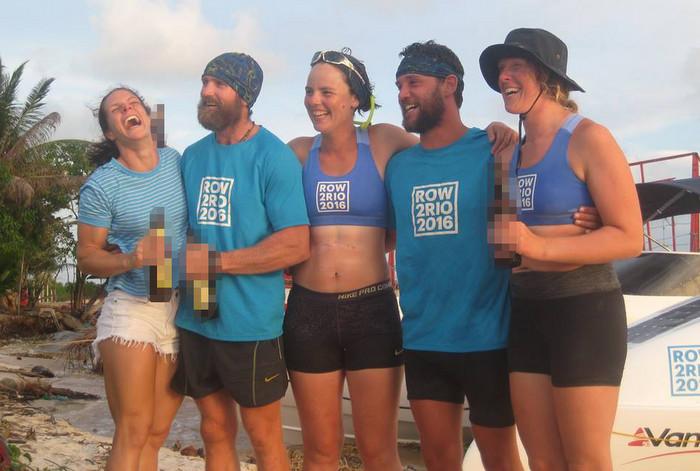 PHUKET: After 3,400 miles and 55 days at sea, the four extraordinary rowers on the Row2Rio team set a world record after powering their way across the Atlantic.

“We departed Portugal and have landed safely in Brazil to an emotional reunion with family and friends,” wrote Luke Richmond, Aussie expat and head coach at Unit 27 in Phuket, yesterday.

In the past five years, Mr Richmond has climbed the biggest mountains on six continents, been held captive in West Papua and has endured many ‘suffer-fests’ on expeditions around the world.

“This was by far the toughest challenge I have ever undertaken and to come out the other end 15 kilograms lighter, but mainly unscathed and with a world record is a true blessing,” he wrote.

Mr Richmond was invited to join the rowing challenge after one of the team members was struck with appendicitis just two weeks from their scheduled departure from Portugal. Without hesitation, Mr Richmond jumped on a plane to meet with Susannah Cass from Ireland, Mel Parker from the UK and Jake Heath, also from the UK.

After 55 days of two-hour cycles of rowing, followed by two hours of rest, the crew waddled off their boat after landing 35 miles north of Recife, Brazil this weekend.

They are now claiming the world record for completing a new ocean rowing route, for mixed crew and a team of four.

“For me, the best day on the boat was finding out that a very close relative of mine had been given the 12-month all clear from cancer,” Ms Parker told Bt.com.

“There were definitely tears on the boat. It has been a tough year, not made any easier by me rowing the Atlantic.

“The support we have received from Macmillan has been incredible,” Ms Parker said. “We all realized in our own ways that we need to give something back – it’s time to payback the kindness we received, with this challenge of a lifetime.”

Though the trip was paying tribute to the athletic feats of the Olympics, as the Olympic stadium moved from London on to Rio de Janeiro, it was also designed to raise funds for Macmillan Cancer Support.

“We fully support their ethos that no one should face cancer alone. Currently, one in four people are isolated facing cancer. Our target is 200,000 pounds, of which 75,000 pounds will be to fund the boat (which we’ll sell at the end and donate the proceeds to Macmillan) and 125,000 pounds for the charity, which is enough to fund two Macmillan Nurses for two years,” explained the Row2Rio website at the beginning of the journey.

In fact, the journey for Ms Cass, Ms Parker and Mr Heath started with a cycling trip from London to Portugal. These three original members of the Row2Rio team will be resting up before getting back into the saddle to finish their journey to Rio.

“Thank you to everyone for their support over the last two months, but most of all, thank you to my amazing Row2Rio team. We got through it together and I thank you for allowing me to suffer through it with you,” wrote a grateful Mr Richmond, referring to the opportunity to join the Row2Rio team when they found themselves down a crew member just two weeks ahead of their planned departure date.