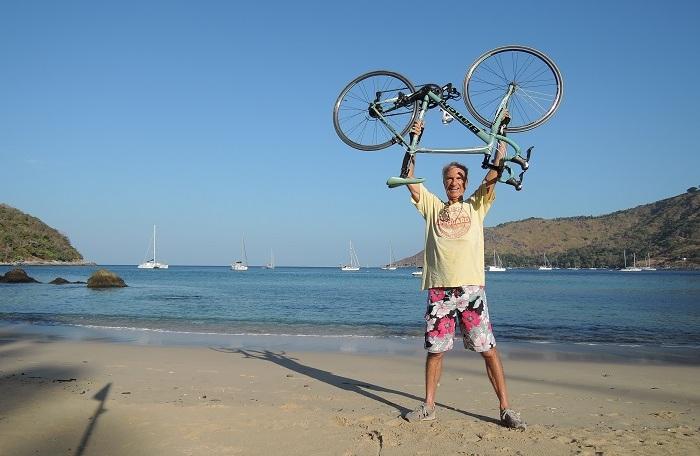 PHUKET: “The problem with cycling is it’s all legs and lungs boyo,” so said someone who really ought to know. I was cycling with a member of the Welsh national team some thirty years ago in the lung-bursting Brecon Beacons in Central Wales, and his comment has always reminded me of how important it is to balance pedal-pushing with other activities, particularly those that exercise the upper body.

However, for a well-rounded fitness program, cycling needs to be complimented with upper body exercises, ideally combined with stretching and weight lifting.

Science has also discovered a lot about the effects of continuously exercising in the same way without variation over extended periods. Basically, the human body is very clever at adapting to regularity, and eventually becoming lazy and taking short cuts in reducing the work it has to do if it knows what exercise is coming every day.

In other words, by doing a variety of exercises, rather than just one sport, your body’s athletic and fitness levels have no choice but to grow. Cross-training workouts aren’t tailored to a single goal, such as gaining strength, or getting faster, but rather cater to these needs simultaneously. With cross-training, it’s possible to gain muscle, lose fat, increase aerobic capacity and quicken your reactions all in a single workout. This comprehensive style of fitness training is one of the many great benefits of cross-training.

You will get a better training effect and be much more fit overall, if you keep your body guessing by mixing up your exercise routines.

Moreover, repetition often leads to injury as joints, ligaments, muscles and tendons throughout your body are under a tremendous amount of stress, and it’s important to give them the occasional break. By mixing up your routine, you give the overused parts of your body a chance to rest and the underused parts a chance to strengthen and catch-up. By cross-training you gain greater overall health and rounded fitness.

Active recovery is the practice of using an alternative type of exercise to recover from your main exercise such as cycling. In addition to the conditioning and injury preventing benefits of cross training, it has been shown to actually speed up recovery, by increasing blood flow and delivery of nutrients to stressed or damaged muscle tissues.

In Phuket we are blessed with cross training opportunities as we have plenty of cycling routes that take us into hilly areas for walking and climbing. Of course, being on an island, the chance of a sea-swim and a beach-jog are never far away.

My own particular perfect cross-training workout takes in a bike ride to one of the island’s truly iconic landmarks, a hike or jog along a sea-lashed headland with stunning views, and a swim at a beach which TripAdvisor has just voted the sixth best in Asia.

The key to enjoying this experience is an early start to beat both heat and traffic. I usually set off from home in Chalong into the heart of Rawai and along the waterfront, getting there no later than 7am. Then it’s up Prom Thep Cape on the quieter back road to the famous lookout with its iconic lighthouse and elephant shrine.

It’s important to get there early, as fume-belching tour buses arrive from 8:30 am onwards, disgorging hundreds of selfie-taking Chinese tourists. Lock up your bike and do the hike (or run if you are really fit) out and back along the southernmost promontory with its fabulous sea, and island views all around you.

Gulp down a copious amount of water and head down the hill to Ya Nui Beach, then up and over the lookout hill to Nai Harn Beach for your swim and a walk or jog along the sands.

The whole trip will take you about two and a half hours, and gives you a very thorough cross-training work out combining cycling, jogging/walking and swimming. To round it off, cycle back to Delish Cafe in Chalong for poached eggs on toast and a coffee!