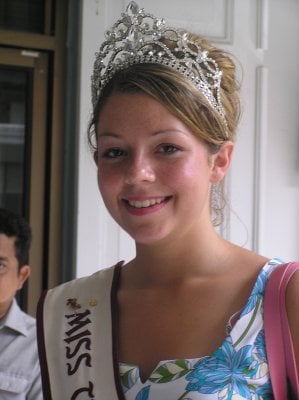 PHUKET CITY: Miss Teen Canada International 2005, 18-year-old Amanda Klyn, donated some 2,000 teddy bears to children affected by the tsunami, during her visit to Phuket and Phang Nga from August 7 to 9.

Miss Klyn was invited to visit Thailand by Sananchart Thephasadin, the Thai Ambassador to Canada, after winning her title in January.

She explained that the teddy bears were donated by children she met while traveling across Canada, as well as by some 40 children in Asia, for her to give to children in tsunami-affected areas in Phuket and Phang Nga.

“I went to a tsunami-affected area yesterday and to a school [in Kamala] this morning that has a lot of children who were orphaned by the tsunami, and we distributed teddy bears there,” Miss Klyn said on August 8.

She added that she thought Phuket had made long strides in its recovery. “I think it has recovered very well. It’s very difficult to tell that something happened here,” she said.

“The people have been welcoming and open to tourists, and everyone has been just wonderful in helping us in getting the teddy bears here. The government has been wonderful in facilitating it.”

Miss Klyn also encouraged Canadians to visit Phuket. “I think that Thailand is a beautiful country. Canadians should be encouraged to come here because the Thai people are extremely welcoming and it is truly a beautiful place,” she said.