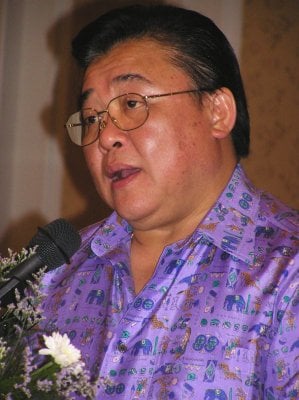 PATONG: It appears unlikely that Patong will get the 350 million baht it wants for burying power cables, after Sports and Tourism Minister Pracha Maleenont sternly shot down a budget proposal for the project at a meeting on post-tsunami redevelopment.

The meeting, at the Graceland Resort and Spa on Wednesday, was held to discuss progress reports on tourism redevelopment efforts in the six tsunami-affected provinces.

As host – and the only province to be represented by its provincial Governor – Phuket was the first province to report to K. Pracha, who chaired the meeting.

However, he said, the local business community was very much in favor of the project, and Patong Municipality had already cleared a two-meter-wide path along the beach road to accommodate the subterranean cables.

“If we don’t go ahead with this project now, it will be very difficult to get it done in the future. We requested a budget from the government, and the Provincial Electricity Authority (PEA) has agreed to budget 40 million baht, but we will need more than that,” he said.

He then turned over the floor to Patong Mayor Pian Keesin to make a budget request for the project, estimated at 350 million baht.

“Patong really needs to have underground cables. So if it’s possible, could the Office of Tourism Development provide 100 million baht and the Ministry of Sports and Tourism another 100 million? If the PEA could [increase its contribution] to 100 million, then Patong Municipality could pay the remainder.

“Could the Ministry please help us with just 100 million baht for this project?” he asked.

Mayor Pian then began to ask K. Pracha to help lobby the government to designate Patong as a “special tourism zone”, where entertainment venues would be allowed to remain open until 3 am or 4 am.

K. Pracha cut the mayor off in mid-flow. “Local administrations are always making requests for this and for that,” he said. “Please be aware of what the Ministry of Tourism and Sports is responsible for and what it can accomplish. You continually ask and ask, but the government still has other parts of the country to take care of.”

Former Phuket Chamber of Commerce Chairman Pamuke Archariyachai then suggested that finishing the national tsunami warning system by the start of the high season should be a top priority to restore confidence among foreign tourists.

He also asked the Ministry to promote the region in other Asian countries, because they are an important source of low-season tourists, and encouraged the Ministry to host a top-level sports tournament, such as an Asian Circuit golf tournament, that would bring well-heeled tourists to the island.

K. Pracha said he agreed with these ideas, but noted that the warning system would not likely be finished by September.

The other five provinces then presented their own progress reports. Many of these, such as Krabi Province’s request for funding to extend the runway at Krabi Airport, included a series of budget requests.

K. Pracha told the media after the meeting that most of the requests were more about infrastructure development than sports and tourism and, as such, should be submitted to other ministries.

However, he added, the redevelopment of Patong and Kamala remains the top policy objective at his Ministry.

Tourism Authority of Thailand (TAT) Governor Juthamas Siriwan, also present at the meeting, added that the TAT would finish the first phase of its redevelopment plan for Patong and Kamala by September as a “gift” to high-season tourists. The work involves landscaping areas along the tsunami-damaged beaches.

K. Juthamas said she expects hotel occupancy rates in the coming high season to average 70% to 80%.

Cloud seeders back in Phuket