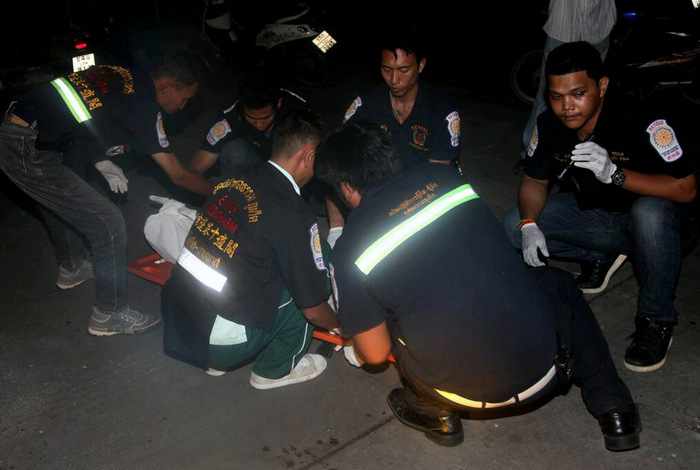 PHUKET: Police are continuing an investigation in the hope of identifying two men who were hunted down and hacked to death at a fish-processing plant in Phuket last night.

Witnesses told police they saw a gang of five men chasing two others from Sri Suthat Road into a fish-processing compound in Rassada at about 10:30pm.

“Both of the victims were 25 to 30 years old,” said Maj Somchai Nooboon of the Phuket City Police.

“One of the victims was dressed in a t-shirt and shorts, and looked like he had been stabbed through the heart in the attack.

“About 15 meters away was the body of the other victim, face down in a pool of blood. He had a deep wound through his back into his chest.

“This man was dressed in a long-sleeved shirt and trousers, had shoulder-length hair and was wearing red earrings.”

No forms of identification were found on either of the bodies, Maj Somchai told the Phuket Gazette.

“We believe that both victims worked on fishing boats and lived in the area,” he added. “However, we have no idea who they were and there are no CCTV cameras in the area that could help us identify the attackers.”

Maj Somchai urged anyone with missing friends or family members, and whose descriptions match the bodies found, to contact the Phuket City Police at 076-212129.

“The bodies were taken to Vachira Phuket Hospital morgue,” he said. “People may inquire there if they believe they might be able to identify either of the two victims.

“In the meantime, we will continue our investigation and question local residents and fishing boat operators in the area.”