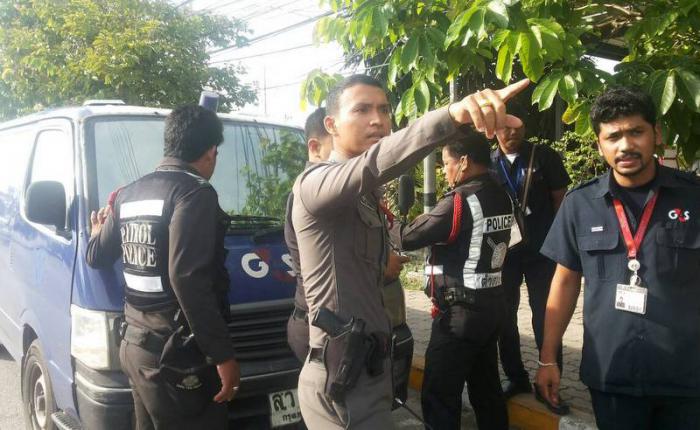 PHUKET: Three suspects who opened fire on an armored van carrying 10 million baht yesterday afternoon were chased down by the van driver, but managed to escape.

The van had left Tesco Lotus in Phuket Town and was northbound on Thepkrasattri Road, headed to refill ATMs in Bang Tao and at the Phuket International Airport when the men fired on it.

“We were near the Ta Rua Shrine at about 4:30 when three men approached us riding a single motorbike. They cut us off, and then the two passengers turned to shoot at us with handguns,” Jiriya Saelim, the van driver, said. “One of the shooters pointed his finger at us like he was very angry.”

Also in the truck at the time of the shooting was Mr Jiriya’s co-worker, Sarawuth NhuChoo.

“I knew we were safe in the van, so we started to chase them, but lost them at a traffic light,” Mr Jiriya said.

“At the scene we found eight marks on the G4S Cash Services (Thailand) van from where rounds of ammunition struck it,” Lt Col Watcharapong Plaiphan of the Thalang Police told the Phuket Gazette.

“At this stage we have a description of the motorbike, but there was no license plate. However, CCTV captured images of the suspects, so we’re starting there,” he said.