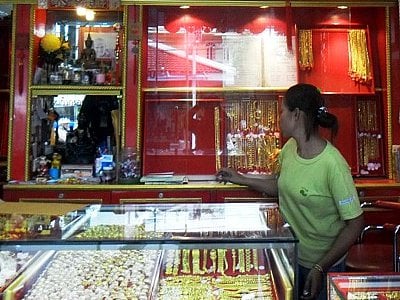 PHUKET: Police have launched a manhunt after a lone robber made off with 4 million baht in jewelry from a gold shop in Phuket Town earlier today.

Chantana Thanetthanasombut, owner of the Thong Thanet gold shop at the Yee Teng complex at the Slaughterhouse Intersection, told the Phuket Gazette that a man entered her shop about midday today posing as a customer.

“I was showing him a necklace when he pulled out a gun,” she said.

Mrs Chantana saw that the man’s gun was fake and drew her own handgun, but the man quickly snatched it from her hands and used her own gun to threaten her.

With a handful of gold necklaces in hand, the man ran out of the shop and rode off on his motorcycle.

After receiving a report of the robbery, Phuket City Police Deputy Superintendent Charoon Plaiduang ordered a manhunt for the culprit.

It was later discovered to have been rented in Patong.

A witness at the housing estate told police that the man was picked up by a blue four-door Ford.

The manhunt is ongoing with Phuket in lockdown.

He added that police believe the robber is still in Phuket.

When carrying out the robbery he was wearing a Starbucks t-shirt and jeans, Lt Col Charoon added.

F1 back in Bahrain