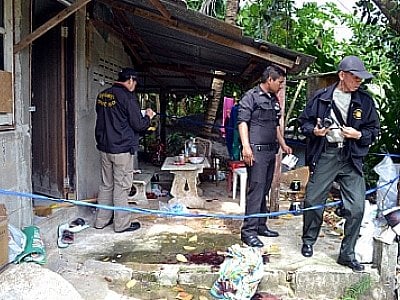 PHUKET: Phuket police are investigating what happened between two “cousins” last seen sitting together drinking in front of a house in Patong yesterday morning.

One man was found still at the scene, shot in the head and grasping a 9mm handgun.

The other man is missing.

Lt Col Chaowalit Neamwadee, duty officer at Patong Police Station, said police received a report about 11:20am that a man had shot himself.

Officers arrived at the scene, a house opposite Suwannakiree Temple (Wat Patong) on Prabarami Rd, to find Yodthong Pinjit, 34, from Rachaburi, on the ground with a serious head wound.

Suneerat Pissadu, the younger sister of Montri Pissadu, a “cousin” of the deceased, said Mr Yodthong was last seen in front of the house drinking with Montri, 35, when she went out to buy food.

“When I came home, Yodthong was lying on the ground. I called my boyfriend to call the police. My brother had gone,” Ms Suneerat said.

Sampawat Wannasangkam, a Patong Municipality officer and one of the first to arrive at the scene, reported that, “Yodthong was still breathing when we arrived and he was holding a gun in his right hand.

“A medical team arrived a few minutes later to rush him to Patong Hospital,” he said.

Mr Yodthong was later transferred to Vachira Phuket Hospital in Phuket Town, where he was dead on arrival.

Ampai Pissadu, Mr Montri’s mother, was shocked by the incident.

“The two of them were very close. They have never had an argument,” she said.

“The gun belongs to my son. He usually shoots it into the sky,” she added.

Lt Col Chaowalit said police were continuing their investigation into the incident.