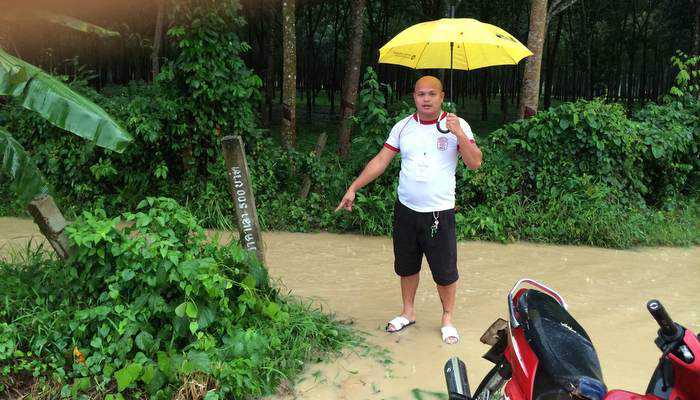 PHUKET: A man shot dead his friend this morning in a fit of rage following a drunken argument that turned deadly.

The victim, 38-year-old Smingdam Phollawong, a rubber plantation worker from Mukdahan, was found lying dead in front of the suspect’s house, with a fatal gunshot wound to his left shoulder, Thalang Police Superintendent Sirisak Wasasiri told the Phuket Gazette.

The pair had been drinking heavily at the suspect’s house in a rubber plantation near Tah Rua Temple, he said.

“When we arrived at the house, the alleged shooter, 37-year-old Ong-art Meepap, a cement truck driver from Sakon Nakhon, had already fled the scene,” Col Sirisak explained.

“Mr Ong-art’s wife, who called the police, said the pair had been drinking heavily since early morning. They got into an argument and Mr Smingdam spat in Mr Ong-art’s face.

“Mr Ong-art became so enraged that he pulled out a gun and shot Mr Smingdam.”

Police said the gun was homemade and had left a number of deep wounds in the victim’s shoulder.

“After he was shot, Mr Smingdam tried to run away, but he collapsed and died outside the Mr Ong-art’s house,” Col Sirisak said.

“Mr Ong-art is still at large, but we will keep hunting for him in the rubber plantations near his home where we believe he is hiding.”

Police are preparing to press charges of murder and several gun-related offenses, including possession of a weapon without a permit, Col Sirisak confirmed.