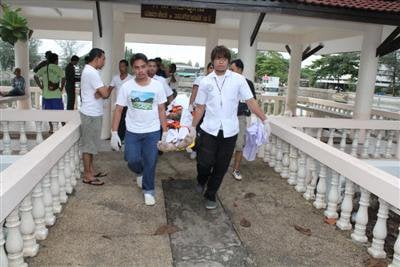 PHUKET: A man was found dead in a sala [a Thai-style open pavillion] in Phuket Town yesterday afternoon, just 50 meters from where hundreds of people gathered for the first day of the Department of Internal Trade’s ‘Blue Flag Fair.

Police and Kusoldharm Foundation workers arrived to find the barefoot body of the deceased lying on the ground of the sala, against a bench support, clad in a shirt and trousers. There was a bottle of 40-degree proof whiskey nearby.

Police and rescue workers estimated the age of the deceased as 40 to 50 years. Based on the state of the body, he probably passed away about two hours earlier, they said.

A friend named “Chai” identified the deceased as “Prasit”, but could not give his last name.

Mr Prasit worked in a garage in Muang District and enjoyed going to the sala to drink, he said.

He speculated that recent heavy rains and resulting cold weather may have caused Mr Prasit to drink at a faster rate than normal in an effort to keep warm, thus resulting in his death.

After police examined the body and found no signs of trauma or foul play, Kusoldharm Foundation workers transported it to Vachira Phuket Hospital for further examination and storage until it could be claimed by relatives.

The death is similar in many regards to that of a homeless man named “Phol” who was found dead next to Gymnasium 1 at Saphan Hin on June 8. Excessive alcohol consumption and cold weather were also suspected in his death.

As a public park, both smoking and drinking are technically forbidden at Saphan Hin. In reality, it is one of the most popular drinking spots in the city.

The park has also been the site of many violent clashes among rival teenage gangs, although the volume reports of such incidents has greatly decreased in recent years.