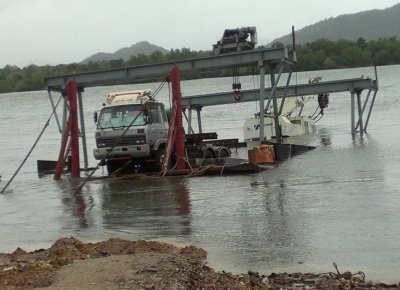 PHUKET: The project to build a bridge between the two islands Koh Lanta Noi and Koh Lanta Yai took a soggy step backward yesterday morning when a ferry waiting to unload its cargo of construction materials to build the bridge started taking on water in the rough weather currently affecting much of Thailand, including Phuket.

The partial sinking of the ferry occurred while the vessel was floating off the Sala Dan landing on Koh Lanta Noi, in Krabi province.

It is believed that the ferry, stationed at the landing since the previous day, partially sank as a result of heavy rain fall onto the cargo deck, causing it to list and take on more water.

One witnessed reported, “The tide rose quickly and then water began to fill the ferry from the back. After that the ferry slowly started to sink.

“When the ferry sank, it had on board a truck, a crane and foundation piles. They planned to store everything near the landing area in preparation for building the bridge,” he explained.

The estimated costs of the damage to the ferry and cargo have yet to be released.

Krabi Office of Rural Roads Director Somkiet Trakulhun said, “I was not aware of the incident, but I believe the Prayoonwit Company can salvage the ferry out without any help from us. They are a big company and they have enough resources.