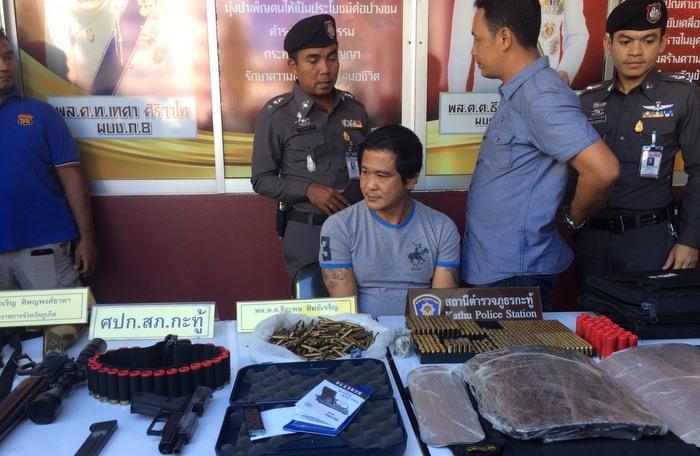 PHUKET: A Phuket man was arrested in possession of war weapons and related paraphernalia at his home in Patong yesterday.

Police were sent to the residence of Sompong Sakoonthap after several complaints were made last month about the sound of gunshots coming from his home, confirmed Lt Col Sutthichai Thianpo of the Patong Police

“After a month long investigation, we obtained a search warrant to check Mr Sompong’s house, which was located near a 3-rai rubber plantation on the way to Paradise Beach,” Col Sutthichai said. “Inside a safe we found a 9mm pistol, 466 9mm bullets, a Marlin firearm, a bullet holder, six bullet proof vests and various other bullets.”

“Mr Sompong was charged with possession of war weapons and other war equipment, and was taken to Patong Police Station for questioning,” Col Sutthichai said. “However, he declined to provide any answers, saying he would prefer to answer in court.”

Mr Sompong was previously involved in a land encroachment case and is allegedly an “influential” man in the Patong area.

Despite Mr Sompong’s silence, police say they will continue to investigate how and why he acquired the weapons.