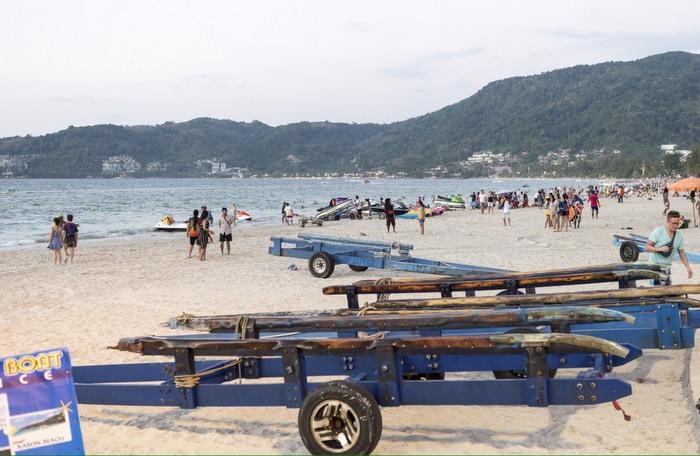 PHUKET: New jet-ski regulations will now mandate that every renter must be at least 18 years of age to be allowed to operate the vehicle by himself.

Six new jet-ski regulations are to be put in place within 30 days, confirmed Vice Governor Chokdee Amornwat at a meeting with jet-ski operators this morning.

“Should a driver be under the age limit, he or she must be accompanied by either a member of the jet-ski company staff, a parent, or a person who is of age,” Vice Governor Chokdee said.

Controversial Phuket Marine Chief Phuripat Theerakulpisut, who also attended the meeting, noted that jet-ski operators will also have to abide by the rules at the beaches’ 10 per cent zones where they operate.

“Jet-ski operators are not allowed to put up umbrellas, tables, chairs, sofas, or any other equipment outside of the 10 per cent zones,” Mr Phuripat said. “They must set up an area or a booth in which to conduct business, just like other vendors on the beach. They must also wear a shirt that identifies what jet-ski club they work for.”

New regulations for the island’s highly unpopular jet-skis have been tabled in the wake of numerous accidents and concerns raised during the Governor’s monthly consulate meetings (story here).

The Marine Office will also inform local authorities to set up buoys for jet-ski zones in order to prevent riders from driving to other beaches.

“However, it becomes the responsibility of the operators to clearly explain the zones to renters before they set out. Operators will be held responsible for anyone who does not follow the rules,” Mr Phuripat said.

In addition to the new age requirements and zoning rules, officials laid out three more regulations to be implemented within a month’s time.

“Migrant workers will not be permitted to work for jet-ski operators, as they are unable to communicate with tourists; all jet-skis must remain in the water; and parasailing and jet-skis will be joined together under one club,” Mr Phuripat added.

Should an operator provide services to an underage person or to tourists riding outside of the designated zones, the vehicle in question will be banned from further use, confirmed V/Gov Chokdee.