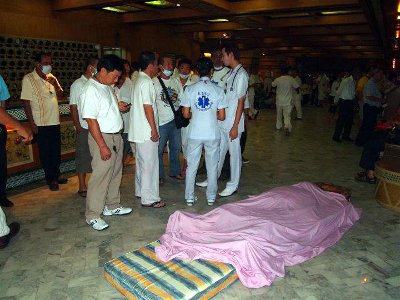 Heng Yak Seng, 76, came to Phuket with a tour group from Malaysia, which has a large ethnic Chinese population interested in Phuket’s signature cultural event.

Pol Capt Somchai Nuboon of the Phuket City Police said, “Mr Heng was playing with firecrackers during the procession. He began to have difficulty breathing, walked inside the Pearl Hotel, sat down and died.”

The police investigation determined the cause of death as old age coupled with a pre-existing cardiac condition, he said.

An officer in the international section at Vachira Phuket Hospital said relatives who accompanied Mr Heng on the trip had already claimed his body.

The final night of the Phuket Vegetarian Festival is also its loudest, as devotees from all participating shrines join in a procession to Saphan Hin.

The focal point is the Jade Emperor, an image of which passes in a palanquin carried by devotees who light off large strips of traditional firecrackers as a way of showing respect to the ruler of heaven and all realms of existence below.