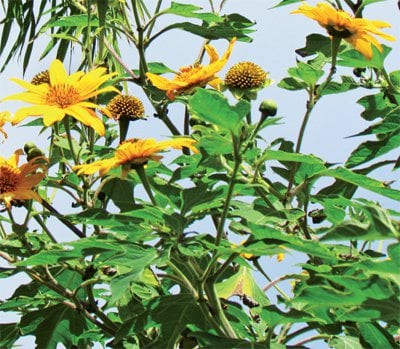 PHUKET: The many virtues of ground cover plants were have already been discussed: their contrasting textures and colors; their capacity to act as a retaining layer by protecting the topsoil during tropical downpours, or as a natural mulch that absorbs much of the sun’s heat and inhibits the growth of weeds. Most importantly, they cover bare and unsightly areas.

No ground cover plant is better than Wedelia trilobata or creeping daisy (kradum thawng). Originally imported from the Caribbean, it grows like a weed in Phuket, rapidly covering patches that have been churned up and left for dead. But nothing stays dead for long in this part of the tropics, and Wedelia is one of the first to recolonize such places. Indeed, such is the success of the creeping daisy that it is classified as an invasive species in some Pacific regions.

A member of the aster family, it has shiny, dark green, trilobed leaves, and yellow flowers that resemble daisies, with up to a dozen petals. The reason it spreads so quickly is due to their creeping stems – they put down roots from their leaf nodes as they explore new terrain.

If you want to grow Widelia in your own garden patch, simply pull up some rooted stems and replant them where you require cover. Since it tolerates sun or shade, and most soil conditions, Wedelia will do the rest on its own. It does particularly well under trees: in one area of my garden it has provided denser cover than the original Malaysian palm grass. Since it has a naturally trailing habit, it also does well in raised containers. However, it can become straggly, so trim when required, especially if the stems invade border areas – and it will. Nothing will cover the ground faster or more effectively than this plant. In the right conditions, it will form a dense green mat that’s constantly adorned with yellow blooms.

Tithonia diversifolia, or bua thawg, is another bright bloomer that also takes up a lot space. It doesn’t lie low, but instead forms spectacular clumps. Naturalized in parts of Northern Thailand, it may cover whole hillsides with its orange flowers from September to December. The flowers are huge – up to five inches across – hence its common name, Mexican sunflower. Although it’s more of a screening shrub than a ground cover agent, it’s definitely worth growing should you need to blot out any unsightly objects or spaces in your garden.

The same can be said of Lantana montevidensis, another hardy shrub which provides a useful cover for sunny parts of the garden. It has rough, dark green foliage, and constant clusters of pinkish-mauve flowers. Nowadays, many hybrids are available in Phuket’s nurseries, often with different combinations of colors on the same plant. Since Lantana spreads by means of creeping stems, it covers the ground effectively and rapidly and needs little attention apart from liberal doses of sun and well-drained soil. It dislikes waterlogged conditions, but it’s not likely to encounter this in most Phuket gardens.

Cuphea hyssopifolia is a much smaller shrub (about 50 centimeters high) with tiny, evergreen leaves and a multi-branched habit. With its low spreading growth and small mauve flowers, from a distance it looks like a heather, hence its common name, false heather. A popular plant for border edges when planted en masse, it can carpet a whole area. Don’t put it in deep shade – it will die back.

What do these shrubs have in common? Well, they all come from Central America, they all provide ground cover, and oddly enough, they have all been labeled “invasive” in other parts of the globe.

Gardening tip of the week

A microclimate is defined as a small area which has a climate that differs from that of the surrounding area. It may be wetter, drier, warmer, colder, sunnier or shadier.

Even a small island such as Phuket has distinct climatic variations. From May to November, the prevailing winds come from the southwest – from the Indian Ocean – which result in heavier rainfall on the west coast. From December to April, northeast winds arriving from China bring cooler, drier air. Since Phuket has a backbone of hills, the windward side is more affected by these climatic patterns.

Some microclimates exist because of inland water, forests, or shorelines. Urban areas are hotter than ‘green’ spaces because of the generation and retention of heat and carbon dioxide.

If your garden undulates, the south-facing slopes will get more sun, so you need to select plants that will tolerate its full effects, for example euphorbias, ixoras, bougainvilleas, or pereskias.

Phuket Gardening – Between a rock and a hard place

Phuket Lifestyle: Having a baby?