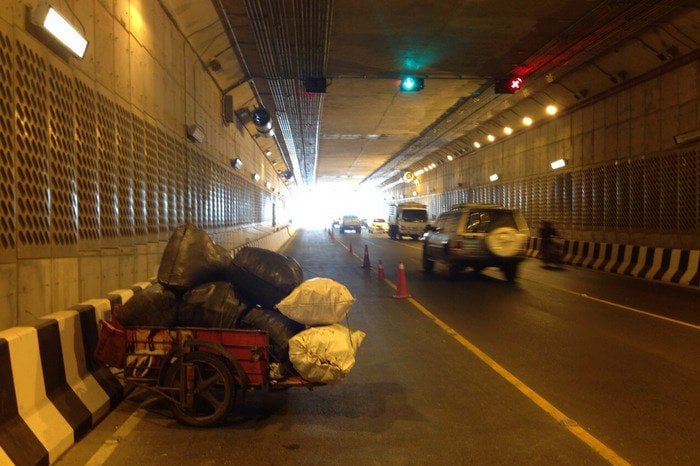 PHUKET: A garbage collector driving a motorbike with a sidecar escaped serious injury in the first road accident in Phuket’s new underpass, prompting fines, improved safety measures and a warning from island officials.

“The motorbike driver went inside the underpass and started to make a u-turn to head north again when he was clipped by a passing truck,” he said.

Mr Samak declined to name the drivers, and neither was charged for the accident.

“The motorbike driver was taken to Vachira Phuket Hospital for treatment to minor wounds and was released shortly thereafter. He was lucky that he was not more seriously injured,” Mr Samak said.

Motorbikes, sidecars, bicycles and other small two to three-wheeled vehicles have been prohibited from entering the underpass since it opened, he noted.

“From now on, every small vehicle driver will be fined 1,000 baht if he or she is caught driving through the tunnel,” Mr Samak confirmed.

Officials will also be installing more visible and larger warning signs, as well as CCTV cameras both inside and outside of the tunnel.

“We are now installing four 360-degree CCTV cameras; two in the middle and one on each end of the tunnel,” Mr Samak said.

“Larger signs informing motorists that small, two to three-wheeled vehicles are prohibited will also be posted outside of the underpass.”