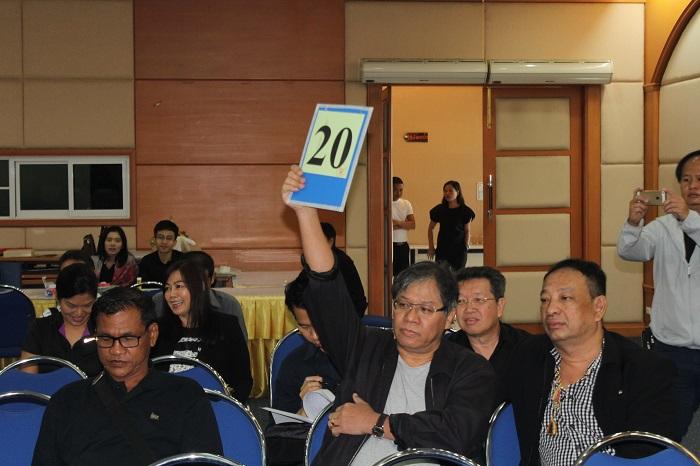 PHUKET: A second round of auctioning off assets seized from the defunct Tranlee Travel Co at the Phuket Municipality office yesterday attracted little interest from potential buyers.

Back in September, more than 150 assets confiscated from the travel company by the Anti-Money Laundering Office (AMLO) fetched 102,742,000 baht over three days of auctions, after the company was found to be operating illegally and subsequently shut down (story here).

The latest auction, which was initially scheduled to be held November 1-4, saw 39 remaining items go under the hammer. Only 12 of those items were sold, raising just over 15 million baht, prompting the organizers to cancel the remaining three days of secondary auctions.

The remaining assets sold included six speedboats priced between 220,000 and 2,400,000 baht – collectively worth 8,480,000 baht. Five of the boats were left over from the first round of auctions after bidders in the first round failed to make the payments.

AMLO representative Wittiya Nititham told the Phuket Gazette that yesterday’s low turnout persuaded the committee to cancel the remaining three days in the second round.

“The committee will decide over the next couple of months whether to hold another auction or not. If there is no more interest, then the assets will be handed over to the government,” he said.

B5mn worth of damages in Phuket plant fire