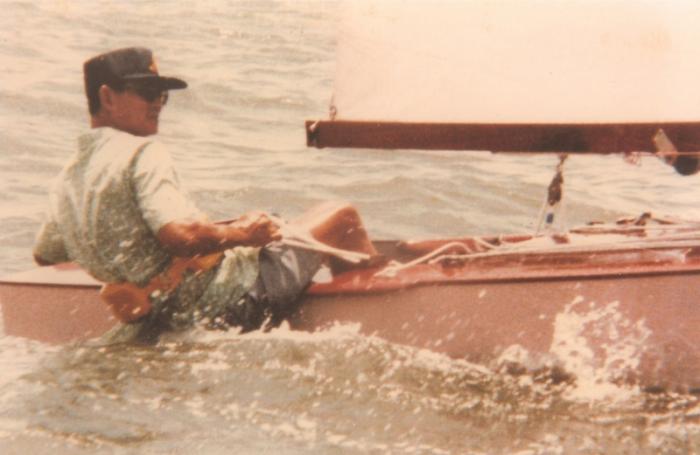 PHUKET: In a recent column, I wrote about a sailing dinghy called “Vega 2”, which was built by His Majesty King Bhumibol Adulyadej and which in 1967 he raced to gold medal success at the 4th Southeast Asia Peninsular Games (now the SEA Games). Much has changed in Thailand since I wrote that column (story here).

His Majesty King Bhumibol Adulyadej of Thailand passed away peacefully on October 13, 2016 in Bangkok. The soul of the nation and a father to all Thais, he worked tirelessly for the betterment of his people throughout his life. He was also a sportsman and an exceptional sailor, and it is the latter, specifically his boat building prowess, that I would like to cover in this column.

His Majesty came across sailing by accident. In 1963 when he was rowing off Klai Kangwon Palace in Hua Hin he passed HSH Prince Bhisadej Rajani who was sailing along, very slowly. This sparked His Majesty’s interest in boats, which then developed into a passion, with His Majesty and the Prince building a number of boats together in a room at the Chitralada Palace in Bangkok, and testing them in the palace’s pond.

His Majesty also built four OK dinghies – an international class originally from Denmark – Novarik, Vega 1, Vega 2 and Vega 3 – the latter has since been renamed New.

However, His Majesty’s legacy perhaps lies in his own dinghy designs.

In 1966, His Majesty created his own class of boats – ‘The Royal Mott Class’. These were designed within the parameters of the ‘International Moth Class’ – an established class that allowed for innovation in design within a set of parameters. The parameters were a maximum overall length of 11 feet and a maximum sail area of 75 square feet. There were no restrictions on the width and shape of the boat, nor on the height of the mast or materials of construction. The ‘International Moth Class’ was a development class, akin to to a modern box rule in sailing.

Between 1966 and 1967, His Majesty built a number of boats in the class using three of his own designs:

1. Mod: a single masted dinghy, 11 feet in length and 4ft 7 inches wide at the beam, with a sail area
of 72 sq ft, the design of which he registered at the Patent Office in Great Britain.

2. Super Mod: a single masted dinghy, 11 feet in length and a fraction wider at 4ft 11 inches.

All were designed to be compact and suitable for Thai sailors. They are lightweight and therefore easy to transport and store, and are low maintenance. While reasonably fast, they were also designed to be relatively cheap to build. In fact, with the desire to encourage the promotion of sailing as a popular sport, His Majesty gave royal permission to the Royal Thai Navy Sailing Club to manufacture two models – the Mod and Super Mod – and sell at reasonable prices.

The Super Mod has arguably been the most popular of His Majesty’s designs, having been used in international competitions, including numerous editions of the SEA Games. In addition, a local fleet has built up over the years and while mostly used by sailors from the Royal Thai Navy and the Yacht Racing Association, the Super Mod fleet does compete once a year at the annual Hua Hin Regatta for the Super Mod National Championship trophy.

In 2007, while the nation was celebrating His Majesty’s 80th birth year up and down the country, the Thai sailing community came together to celebrate it in the best way they knew how. A collective effort of the Royal Thai Navy, Yacht Racing Association of Thailand and PTT saw 80 Super Mods gather at the start line that year for the Hua Hin Regatta, all competing for the national championship – a fitting tribute to the Sailor King.

In recognition of His Majesty’s contributions to sports, and in particular his skills as a dinghy sailor, the International Olympic Committee awarded the “Insignia of the Olympic Order” – the only reigning Monarch ever to receive such an honor. This was at the time of his fifth cycle, 60th birthday in December, 1987 – also the occasion of the inaugural Phuket King’s Cup Regatta, which is celebrating its 30th anniversary this December.

Duncan Worthington is a long time Phuket resident and through Infinity Communications (www.infinity-comms.com) consults to leading consumer brands, hospitality and marine clients in Thailand. In his ‘spare time’ he runs the marine portal MarineScene.asia. #OnDeckPhuket

Looking back: Always there for his own people