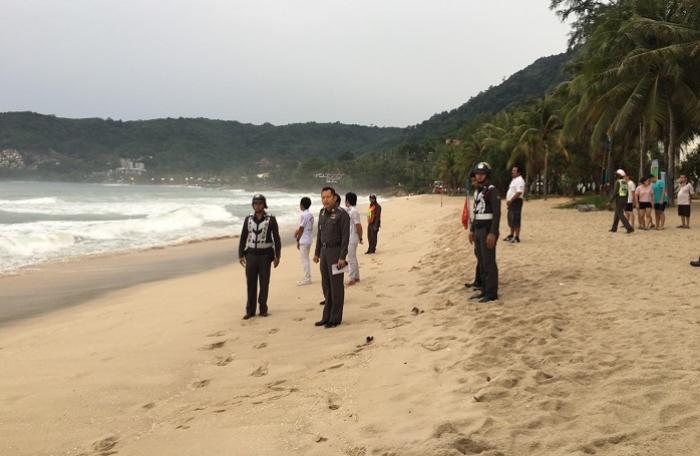 PHUKET: A Korean tourist is dead and another is missing after a domestic dispute lead them to fling themselves into the sea last night.

Patong police were alerted around 3am that locals had recovered the body of a woman washed ashore on Patong Beach.

“At the scene, we found the body of Ms Garam Hong, a 28 year old Korean national, stripped down to her bra,” said Lt Col Pattapee Srichay of Patong police. “Red flags warning against swimming were posted on the beach. Ms Hong was identified by tattoos on her right hand and on her lower back. There was no evidence on her body of any struggle.”

“According witnesses, including a hotel guard, Ms Hong left her hotel around 1am, followed by a man we’ve identified as Mr Siwoo Park, 28. Mr Park followed her and the pair sat on the beach, arguing. Ms Hong then flung herself into the sea, and Mr Park dragged her back out and the pair sat down again,” Col Pattapee said.

“They then resumed arguing and Ms Hong plunged into the sea again, but this time the pair were washed away. Ms Hong’s body was found later, some 300 meters away from the spot where they entered the water,” the policeman said.

Col Pattapee said there was no evidence of violence or a struggle in the couple’s hotel room. They checked in on June 26 and were scheduled to leave today.

“We are coordinating a search for Mr Park with the Kusoldharm Foundation and lifeguards, but heavy wind and surf is making it very difficult,” Col Pattapee added.