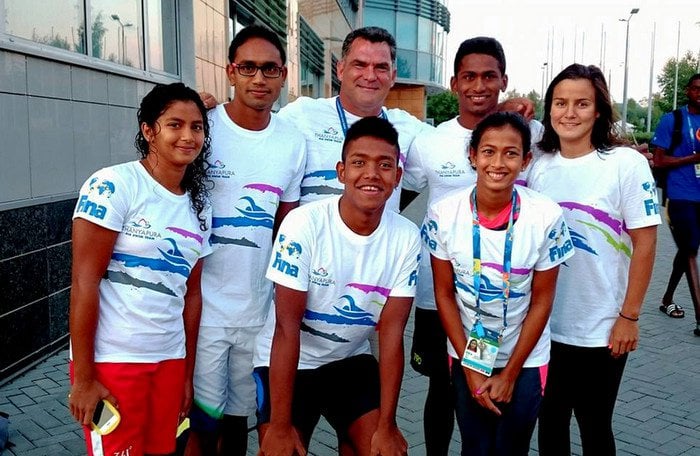 PHUKET: Future Olympians, who are on a year-long FINA swimming scholarship at Thanyapura while they prepare for the Rio Olympics, stormed to victory in the pool in Kazan, Russia breaking a total of eight national records from four different countries.

“The debut of the ‘FINA Road to Rio’ group has been such a success so far, with five swimmers from four different countries contributing to eight new national records so far at the FINA World Championships. I am so proud of all of them,” Thanyapura’s Head Swimming Coach Miguel Lopez said.

Nepalese swimmer Sofia Gadegaard Shah, who just three months ago spent a while living in her car after the devastating Nepal earthquake, placed an incredible first in her heat in the Women’s 200m freestyle race, beating the Nepalese record with a time of 2.18.93 (story here). Later that week, she broke another Nepalese national record in the 50m freestyle event.

Following Sofia’s incredible run was a double whammy by Kimiko Raheem and Cheran de Silva of Sri Lanka, who contributed to the 4 x 100m individual medley relay record. Following this, Kimiko celebrated once again after she broke the Women’s 200m backstroke record with a time of 2.21.1.

A day after Nepal celebrated Sofia’s glory, team mate Sirish Gurung smashed his own national record for the Men’s 100m freestyle with a time of 58.22, but the records didn’t stop there.

The Maldives was cheering at the FINA World Championships when Aminath Shajan beat her current Women’s 200m breaststroke national record by two seconds.

Indian swimmer Sajan Prakash broke the 1,500m freestyle national record and earned himself a B qualifying time for the 2016 Rio Olympics.

The six swimmers are part of the 20 scholars from all around the world who are on the year-long FINA scholarship at Thanyapura to swim in the Olympics.