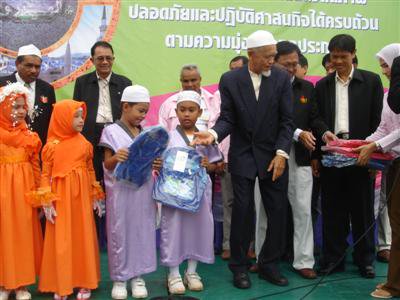 Mulsims make up about 27% of Phuket’s predominantly Buddhist population, according to the Phuket Provincial Culture Office.

Phuket Culture Office chief Thaweechart Intarrarit said the 250 pilgrims who left for Mecca yesterday were the first of more than 1,000 Muslims from Phuket, Phang Nga, Krabi and Ranong who will make the pilgrimage departing from Phuket Airport.

The pilgrims will make their way on four consecutive flights, the first two by Thai Airways and the others by Iran Air.

Such visits are a good way to get to know the local people and understand their problems, said Gov Preecha, who said he was still learning his way around the island.

Gov Preecha said he intends to visit mosques, temples and churches across the island to better familiarize himself with Phuket.

The Governor started his Sunday at 6 am with a one-hour radio broadcast. Then, after the morning event at the airport, he attended the finals of the Phuket Open Volleyball in Karon. He finished up his day in Rawai, where at 7:30 pm he presided over the official opening of Loy Kratong activities at Nai Harn Lake.