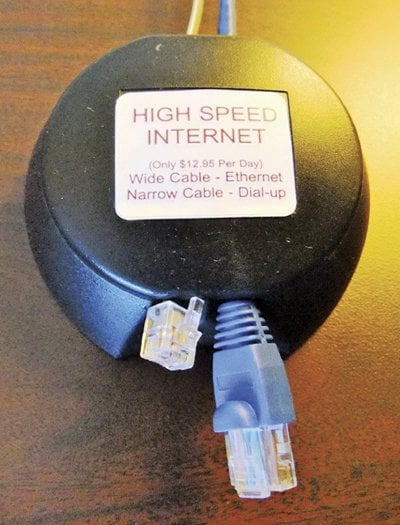 PHUKET: Last week I talked about the general state of internet connections in Phuket. This week I want to drill down on landlines.

I wish I could just point you to a web page that has all of the information about the various internet lines available on Phuket, and let you make a choice. Life isn’t that simple.

You would think that the internet service providers would make some information very easy to find: go to the main page for TOT, for example, maybe click to get the page in English, and then you’d see a list of the packages on offer and their prices. Alas, it doesn’t work that way.

If you’re near a computer, try bringing up tot.co.th and tell me if you can find a list of TOT products and prices, in either Thai or English. Anywhere. I’ve wasted hours trying to get definitive lists of products and prices from the web site, and it’s an exercise in futility.

You’d think TOT would know better. They aren’t the only ones. CAT, True and 3BB – the other leading landline providers in Phuket – aren’t any better.

The only way I’ve found to get actual, valid price lists involves schlepping to the service provider’s office and asking for a brochure. If you’re in the market for a new landline, get down to Central Festival, second floor.

There you’ll find the CAT office (tucked in the back behind the mobile phone booths), True (next to Power Buy), and TOT (in the cul-de-sac with the banks).

3BB is up the street, diagonally opposite Tesco Lotus.

Here are the products that I would try to get, taking into account how much real speed you get for your money. Note that the “Mbps” (millions of bits per second) speeds listed in the brochures and advertising are pure marketing puffery and bear no resemblance at all to the real-world speeds you’re likely to experience. In other words, they’re not much different from internet speed ratings all over the world.

TOT Fiber 2U 10 Mbps – seems to hit the sweet spot, at 1,500 baht/month. You can spend 2,500 baht/month and get the nominal 20 Mbps line, but historically the 20 Mbps line isn’t considerably faster than the 10 Mbps. There are “consumer” and “business” options, with “business” being about four times more expensive than “consumer.” I’ve seen little-to-no evidence that the business lines are any faster than the consumer lines. And if you’re wondering about paying more for a “Fixed IP address,” trust me, you don’t need or want it.

True Ultra Hi-Speed DOCSIS 10 Mbps uses DOCSIS cable TV-style cables. The basic package is a very reasonable 599 baht/month. If you want the TrueVision “Knowledge” package of TV stations hauled in on the same line, the whole thing including internet costs 899 baht/month. The “Knowledge” package includes all of the major Thai language local channels, plus various True-branded sports and movie channels, and the Fox network. Although True is working toward bringing other TV channels in on DOCSIS cable – there are licensing problems – at this point if you want any of the good True TV channels, you have to get a TrueVisions satellite dish.

Some people have had good luck with the True Ultra Hi-Speed DOCSIS 20 Mbps line, at 1,299 baht/month (which includes the Knowledge package of TV channels). Others haven’t seen any significant increase in speed over the 10 Mbps DOCSIS line. Since the 20 Mbps line costs more than twice as much as the 10 Mbps line, I personally wouldn’t pay for it, but it may be worthwhile if you want local Thai language TV channels.

If TOT doesn’t have Fiber near you, and True hasn’t run a DOCSIS cable in your neck of the woods, the next best line isn’t a line at all, really. It’s a box that’s nailed onto the side of your house that gets its signal from a specific kind of mobile phone tower.

The TOT AirMax WiNet service runs B 599/month and it’s faster than garden-variety ADSL lines. Unfortunately, TOT doesn’t have many towers up that can use the service, but it’s worth asking.

If you can’t get any of those packages, you’re left with ADSL. TOT and 3BB have ADSL lines almost everywhere on the island, and CAT and True are almost as well-connected. My personal experience in Patong is that True is more reliable, and a bit faster, than 3BB, but the difference isn’t huge. TOT and CAT are both competitive now – they’re fighting in a commodity business – and their service is reasonably well regarded, as well. In general. You can find specific instances of shoddy service with any of the carriers, of course.

All four of the ADSL providers in Phuket offer decent 10 Mbps lines for about 590 baht. For that price, with a one year commitment, you should get free installation (which is generally remarkably professional) and a truly shoddy free WiFi router.

Almost everyone has to replace the router within a year or two. They just don’t hold up. But that’s another story for another time.

Based on many years of observations, I wouldn’t pay much more for “faster” lines. In many cases, a 10 Mbps ADSL line runs just about as fast as a 20 Mbps ADSL line. You should expect about 1 Mbps in real world international download performance from a 10 Mbps line. That’s fast enough to run Skype or YouTube, but painfully slow for big downloads.

Almost all of the service providers “throttle” (put a speed cap) on torrents and some other large downloads.

You’ll notice that I didn’t mention using a cable TV company for an internet connection. In my experience, the cable TV connections just don’t work very well – they’re technically fragile and not at all fast.

My number-one recommendation for land lines: if you need to be up most of the time, get two packages from two different suppliers. I’ve been running a True 10 Mbps ADSL line and a 3BB 10 Mbps ADSL line, concurrently, for many years, and the combination has worked well: when one line goes down, the other is almost always up. You have to set up your own router so you can swap between the two lines – unplug True and plug in 3BB, or vice versa – but that’s cheap and easy.

Next week I’ll talk about the wireless connections available all over Phuket – indeed, all over Thailand. Our “3G” service isn’t the world’s fastest, but it’s certainly serviceable almost all of the time.