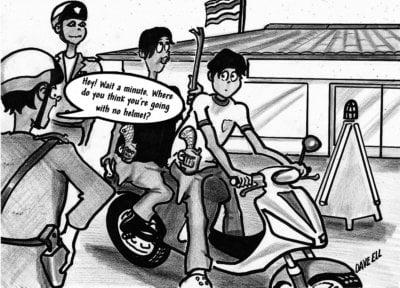 PHUKET: Just days after Prime Minister Abhisit Vejjajiva’s government finally managed to restore order to Bangkok, mob militancy was back on the streets of Thailand. This time, it was closer to home. Protesters blockaded Srisoonthorn Road in Baan Bang Tao for almost 24 hours, causing disruption for both residents of the island and the tourists so crucial to our economy.

Such protests are all too familiar to island residents. In mid-March, a similar blockade took place in Kamala. Villagers there, angry that a man charged with a brutal assault was granted police bail, took to the streets and blockaded the Kamala-Patong Road for 20 hours.

At the beginning of February, the Laguna Phuket resort complex was blockaded by disgruntled staff for three days.

And in early January protesters blockaded the entrance to Sirinath Marine National Park in Sakoo for three days, trapping some tourists’ cars inside the park for the duration.

Any consideration of such protests can hardly ignore the yellow and red elephants in the room. Late last August, yellow-shirted members of the People’s Alliance for Democracy (PAD) forced a complete shutdown of Phuket International Airport.

Prime Minister Abhisit owes his position in large part to this kind of militancy, following the shutdown of Suvarnabhumi and Don Mueang Airports and the occupation of Government House by the PAD protesters last year.

Despite the clear illegality of these actions and the inestimable damage they caused, the PAD leaders have not been held accountable, at least by the courts. This makes it hard to avoid the conclusion that in Thailand, people power – or mob rule – does work.

This message was clearly not lost on Thaksin Shinawatra’s red-shirted supporters, who earlier this month wreaked havoc in Bangkok and Pattaya.

In Phuket, street protests are typically directed at local police. One protester, Voravuth Maneesri, believes “people power” is the only weapon he has to force the authorities to listen to him. [See First Person, page 23, this week’s Phuket Gazette.] There is, after all, no real equivalent of the UK’s Independent Police Complaints Commission (IPCC) in Thailand.

It would perhaps be naïve to call for the immediate establishment of an effective police complaints body in the image of the IPCC, but without such effective mechanisms in place there appears to be no end in sight to street protests, which in a well-functioning society are a matter of absolute last resort – not a knee-jerk reaction.