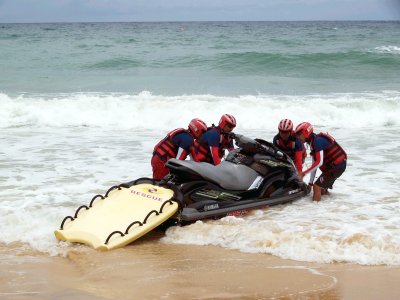 PHUKET: Ahead of the Phuket Surf Life Saving Carnival in Patong this Saturday, an expert surf lifesaving trainer from Australia has called for Phuket lifeguards to introduce different equipment to help them save lives at Phuket beaches.

David Field, an assessor with Surf Life Saving Australia (SLSA) with 20 years’ experience in lifesaving, has called for Phuket lifeguards to use “blue rescue boards” when rescuing swimmers in distress.

The shorter “blue rescue boards” are better fitted to the typical Thai male physique than the larger yellow ones now in use, he explained.

He also repeated his call for Phuket lifeguards to start using jet-ski sleds. “As we know, there are many jet-skis in Phuket, but it can be very difficult to rescue someone with a jet-ski if you don’t have a sled,” he said.

Sled boards allow lifeguards to quickly pluck distressed swimmers out of the water in just about any conditions and allow rescuers to begin CPR on the way back to shore if two lifeguards are aboard, he explained.

He also advised tourists, “Don’t ever swim alone or in a red flag zone. Remember: the ocean is a dangerous place, so seek local advice before entering the water. If you are in trouble, don’t be embarrassed to raise your hand as it is a universal symbol to say that you need help. Don’t panic. Relax and wait for help to come.”

Leading the training were members of the Phuket Lifeguard Club, SLSA, the Phuket Marine Police and the Royal Thai Navy tourism security unit.

The volunteers hailed from all over the island and included hotel staff and members of the public.

They were taught a wide range of skills, including first aid and emergency care techniques, basic rescue skills and how to carry out rescues with and without rescue equipment.

Over the four-month period, foreign tourists were twice as likely to put themselves in harm’s way than Thais, with 356 foreigners receiving assistance, compared with 167 Thais.

Of the 523 people requiring assistance, 80% got into trouble in riptides.

Other cases included encounters with jellyfish, sea urchins, jet-skis, sharp objects including barnacle-covered stones, as well as losing consciousness or other medical conditions.

The Phuket Surf Life Saving Carnival, sponsored by the Gazette, will be held on Saturday at Loma Park, starting at 9am.

For more information about all the fun activities click here.