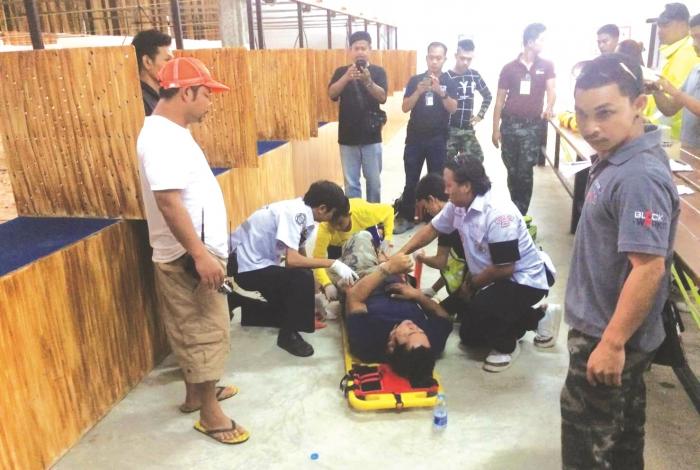 PHUKET: A local firearms instructor was shot by his student during a training session at the Kathu Shooting Range located on Patong Hill at noon on Wednesday.

The 34-year-old Chaisit Chusawad received a bullet wound on his right leg, caused by a 9mm handgun.

“The shooter, named Emad Jamal Khalifa Hamed hailing from Tripoli, Libya, came in with his wife to purchase 10 bullets for handgun training at the shooting range,” confirmed Kathu Police Superintendent Pattanachak Jakkapan. “He told Mr Chaisit that he was going to shoot five bullets, while the rest were for his wife.

Col Pattanachak told Phuket Gazette that a misunderstanding regarding safety requirements at the range, most likely caused by a language barrier, may have resulted in the accidental shooting of Mr Chaisit.

“When Mr Hamed was done shooting, he attempted to hand over the weapon to his wife right away. However, Mr Chaisit grabbed it instead, causing the firearm to discharge,” said Col Pattanachak.

According to shooting range regulations, trainees are supposed to give firearms to the instructors after firing shots.

Mr Chaisit was taken to Vachira Phuket Hospital, where he was treated for his injury and released.

Col Pattanachak confirmed that the incident may have been an accident, and upon further investigations it will be decided whether or not to press charges against Mr Hamed.

Mother of slain German gets help from Thai tourism industry