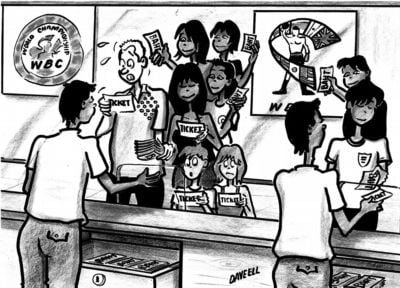 PHUKET: The Phuket Gazette‘s editorial this week comes in the form of an open letter to World Boxing Council (WBC) President Jose Sulaiman on the topic of race-based pricing at the world title fight held at the Bangla Boxing Stadium in Patong, Phuket on May 29.

As you are no doubt aware, WBC champion Oleydong Sithsamerchai recently retained his strawweight crown in a title defense against Muhammed Rachman at the new Bangla Boxing Stadium in Patong, Phuket.

What you might not be aware of is that the host venue charged foreign spectators – tourists and local expatriates alike – a minimum of 2,000 baht (US$58) for seats, while charging Thai nationals a maximum of only 300 baht (US$8.70) to watch the same contest.

Sadly, double-pricing policies based on race or nationality are still quite common in Thailand, but to our knowledge this is the first time they have been imposed at a WBC-sanctioned event. The Phuket Gazette views this as a very negative development that could tarnish the reputation of your council, which has long enjoyed its status as the premier international sanctioning body in the Kingdom.

In the previous two WBC-sanctioned events held in Phuket, including Oleydong’s first title defense staged in Phuket City last June, admission was free to all. Thousands turned up to cheer on local favorite Oleydong, who comes from nearby Trang province.

Free admission has been the case at almost all WBC boxing events in Thailand in the past, ensuring big crowds and the kind of excitement that can only be beneficial to title fights. These contests are also routinely broadcast around the country on free-to-air television.

While the Phuket Gazette has no problem with stadiums charging for seats, the practice of imposing a two-tiered pricing structure based on perceived race or nationality is inherently inequitable, backward and – in the end – self-defeating. Is it any wonder there were so many empty seats at this latest fight?

We hope the WBC will consider such double-pricing policies in the context of the WBC Constitution and Code of Ethics, which clearly states that people in the professional boxing industry should “oppose discrimination on the basis of race, nationality or religion, and act forcefully to counteract it, never co-operating with those who practice it”.

In view of this, and in order to maintain the fairness and the integrity of the sport of boxing, we ask that the WBC take steps to apply, as a precondition, fair and equitable ticket pricing structures for events it sanctions in the future.