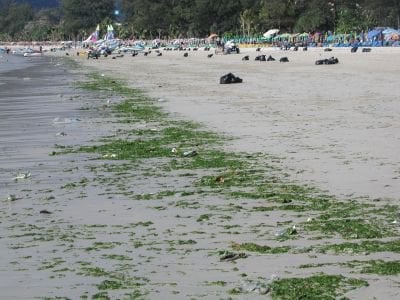 PHUKET: Patong Municipality isn’t sitting idly by as unprecedented amounts of Ulva Reticulata seaweed continue to wash up along its shore. The Municipality is pursuing a two-pronged strategy of collecting the bright green algae and researching ways to put it to good use, including, possibly, promoting it as food. The seaweed is the result of hot-season water temperatures and the introduction of nitrogen and phosphorus into Patong Bay from Klong Pakbang, which empties into the bay at the south end of Patong Beach. The Municipality continues to collect the seaweed using boats and netting, as well as plastic bags for any seaweed that washes ashore. Namphet Chatpunyanon, Director of the Patong Municipality Environmental Health Office, told the Gazette that the marine algae played an important role in “fixing” both nitrogen and phosphorus, two main constituents of human waste. She expects the algae growth to decrease with the annual reversal of prevailing monsoon winds, which is now underway. K. Namphet said that because the Municipality’s wastewater treatment plant was incapable of treating all the wastes generated during the high season, research into the effective use of the algae should be conducted. A research proposal on this topic has already been submitted to the Municipality’s Chief Administrative Officer (palad), who is charged with governing the Municipality until the results of last February’s elections are confirmed by the Phuket Election Committee, if ever. K. Namphet said that Ulva Reticula could be an effective fertilizer and does not cause irritation when it comes into contact with human skin. She said that professor Karnjapart Liewmanoolong of Kasetsart University, who visited Patong recently, told her the seaweed was also safe to eat. When asked how tourists has responded to the presence of the algae, she admitted that there had been complaints. But sensing that a change in public perception about the algae was needed, she told the Gazette , “Maybe we’ll hold a seaweed-eating festival next year.”