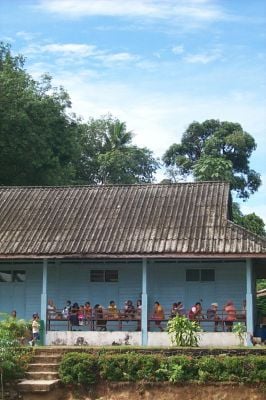 PHUKET: Phuket Governor Udomsak Usawarangura has suggested Koh Maphrao as an alternative location for the proposed Phuket International Convention and Exhibition Center (ICEC) as a way to break a stalemate between the government in Bangkok and local people over where the mega-project should be sited. Speaking with the Gazette at his office, Gov Udomsak said that the island, located about a kilometer off Phuket’s east coast and part of Tambon Koh Kaew, would be an appropriate site because most of its 3.2-square-kilometer area is government land. The Governor said a bridge could be built to provide access to the island. This would afford impressive views from the ICEC. The island might also be suitable for marina development in the future, he added. “I think a budget of not more than 3 billion baht to build the ICEC at Koh Maprao would be appropriate. A bridge to the island could be built for about 500 million baht,” he said. The island is inhabited mainly by Muslim villagers and remains largely undeveloped. It was not among the four “final” sites that were put to a public vote in February, 2003. At that meeting of 262 government officials, leaders of business organizations and members of the public, 226 people voted for a site at Tah Chat Chai in Thalang district. The site at Saphan Hin, favored by the government, received just 19 votes while a third site next to Ao Makham got 17 votes. Last October, however, the Government seemed poised to go ahead with building the ICEC at Saphan Hin, following a meeting between Deputy Prime Minister Somkid Jatusripitak, Tourism Authority of Thailand Governor Juthamas Siriwan, Gov Udomsak, and Dr Prasit Koeysiripong, then President of the Phuket Administration Organization (OrBorJor). The island’s political landscape has changed since then, however, with the Democrat Party having taken control of the OrBorJor. Gov Udomsak, who admitted that the project seems to have fallen into a policy limbo, proposed Koh Maphrao as a way to break the deadlock. “I think Koh Maprao would be a good place, because it wouldn’t involve land reclamation and associated environmental problems. This is just my personal opinion, but I will present it to the other parties involved if we cannot build the ICEC at Saphan Hin,” he said.

Confusion over tourist visas on arrival