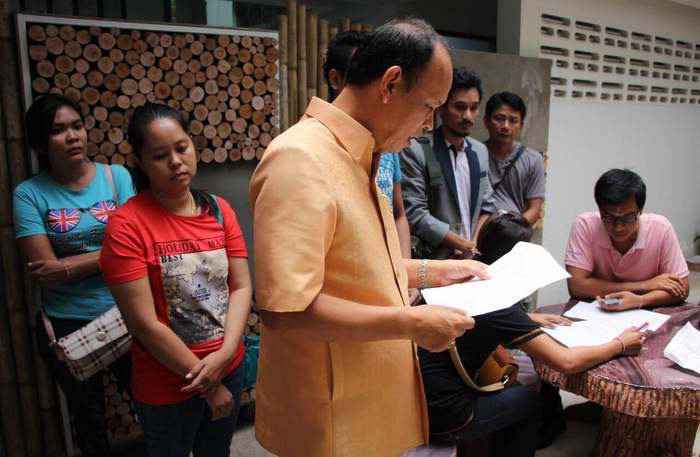 PHUKET: Ten tailors who were recently laid off by a suit exporting company in Patong filed a complaint against their former employer at the Damrongtham Center (ombudsman’s office) on Tuesday.

“We have worked for the John Tailor Ltd company for about three years now. We signed a contract when we started working for them. Our pay was determined by how many pieces we completed, which would end up equaling about 20,000 to 30,000 baht per month,” said Eakkachat Kongkun, a representative for the workers.

“On Monday night, the company fired us without giving us advance notice. They told us that they will pay us for our last pieces of work and will no longer employ us.”

The company showed its expense account to the employees claiming that expenses were too high and that it was necessary to lay some of them off, Mr Eakkachat said.

A representative for John Tailor Ltd, who asked not to be named, told the Phuket Gazette that the laid-off workers did not have valid contracts.

“They are just tailors who worked for us and got paid per piece. They were not permanent employees. We signed contracts with them a few years ago, but they have since expired, so they were working for us on a freelance basis,” the representative explained.

“As our expenses are too high and the quality of work was not what we wanted, we have the right to lay them off.”

Mr Eakkachat claimed that the employees tried to reason with the company.

“We did our best to negotiate an advance notice and requested for more work until the end of the month, so that we could save money and have time to find new work, but the company refused,” Mr Eakkachat said.

“The company kept all of our contracts. Even though we are only paid per piece and not by month, we should still be given advanced notice before being laid off. If they did that, we would understand and be prepared for it.”

Mr Eakkachat also raised concern that the company was replacing them with migrant workers and urged officials to investigate.

Vice Governor Somkiet Sangkaosuttirak accepted the letter of complaint and said that he would talk to the labor office and other related officials.