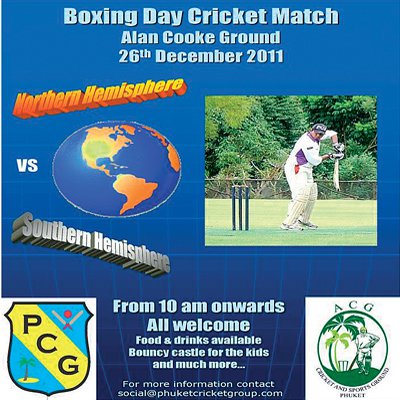 PHUKET: Last year’s Island Furniture T20 champions Laguna Phuket faced the dynamic youth team of the Leopards in the season’s sixth match and the final league encounter of 2011 at the Alan Cooke Ground (ACG) on Sunday.

A convincing victory was needed by Laguna if they were to move to top of the table going into the new year. The Leopards are of course competing for league honors, but their focus is on honing their match play in readiness for the 2012 National Youth Games cricket competition being hosted at the ACG.

Unfortunately, the Leopards’ match experience on Sunday was reduced to that of spectator and a lesson in batting. Laguna scored 329 runs from their allocated 40 overs and with that total set a new ground record.

An unbeaten 84 from Andrew Cole was the highlight of a comfortable Laguna innings which was helped by loose bowling from the Leopards that in the end cost 64 wides and 11 no balls.

If the Leopards bowling was costly their batting proved inexpensive to the Laguna bowling attack with the young guns trudging off the pitch, all out after just 10.3 overs.

Matters could have been a lot worse had Laguna not removed their opening bowlers early on with Val Guiraud (2 wickets for 4 runs) and Sami Ullah (5 wickets for 2 runs including a hat-trick), both of whom decimated the Leopards in the opening 4 overs which presented a remarkable scoreboard showing 7 runs for 7 wickets.

The Leopards got off to a flying start after being put into bat by Laguna when AF Uphama dismissed youth team coach and Laguna opener, Bill Stahmer, with the second ball of the first over from a delightful in-swinging delivery.

Compared to a jubilant Leopards side Laguna were visibly stunned, but opener Damian Clowes (51) playing his first match of the season, took charge and worked a credible half century. Darren Shaw (39), who replaced Stahmer, and Clowes went on to post a solid 122 run partnership backing each other well between the wickets which gave Laguna the base for their record innings.

At the 10 over interval, Laguna were 43 for 1 wicket, but had the Leopards held their catches both Clowes and Shaw could have been back in the pavilion much earlier.

Nineteen overs went by after the first wicket before Clowes was eventually dismissed with the score on 123. Andrew Cole came in at number four and showed his repertoire of strokes by despatching loose deliveries to all sections of the ACG.

Shaw’s wicket fell in the 27th over with the score on 168 and Cole was joined by Mario Piazza (42) whose efforts helped provide an 85 run partnership. Piazza and his unorthodox batting style immediately gored into the Leopards bowling attack, slashing for boundaries at every opportunity.

By the third interval, Laguna were 198 runs for 3 wickets and aiming for a total of 250, but Cole had other plans. Within eight overs Cole and a flurry of other batsmen amassed another 100 runs to shoot past the 300 mark with Sami Ullah, also appearing in his first league match of the season, notably chipping in with a quick fire 25 from just 10 balls.

With the last ball of the Leopards innings delivered, Laguna had rocketed to 329 runs for the loss of 7 wickets and new batting record. Pick of the bowlers for the Leopards were AF Uphama (1 for 31 from 8 overs) and TP Suttiprapha (1 for 38 from 8 overs).

Three exhausting hours in the field clearly took its toll on the Leopards, reflected by opener and captain, PM Suriya being clean bowled by Laguna’s 16-year-old speed demon, Valentine Guiraud, in the first over.

Sami Ullah supported Guiraud from the opposite end and trapped opener, TM Suttiprapha lbw and then demolished the stumps of PA Mahthong to compound the Leopards collective misery and fatigue.

Guiraud continued his onslaught of accuracy and pace in the third over by clean bowling AB Kaewliporn, but it was the fourth over that proved utterly calamitous for the Leopards. Ullah spared not an ounce of reserve and decimated the Leopards middle order. By the end of the over, wickets taken had matched runs scored at 7 for 7 which also included a hat-trick and no runs scored off the bat.

Umpiring official, John King, had his Sunday lounge turn into a workout, having to update the scoreboard with the continuous loss of wickets.

Mercy was shown by Laguna captain, Sameer Kahn with the introduction of leg-spinner, Darren Shaw in the fifth over.

With the opening speedsters removed from the bowling attack, the Leopards managed to push the score along and were 9 wickets down for 38 runs at the completion of 10 overs. Batsman “First” (8) came in last for the Leopards, but with their fate already sealed they could only add one run before finally yielding at 39 runs all out after 10.3 overs. Laguna’s best bowlers were Sami Ullah (5 wickets for 2 runs) and Valentine Guiraud (2 wickets for 4 runs).

Man of the match was Andrew Cole, with Sami Ullah claiming second spot and and Damian Clowes taking third.

The comprehensive win puts Laguna Phuket on top of the league table with the Village, each having 12 points.