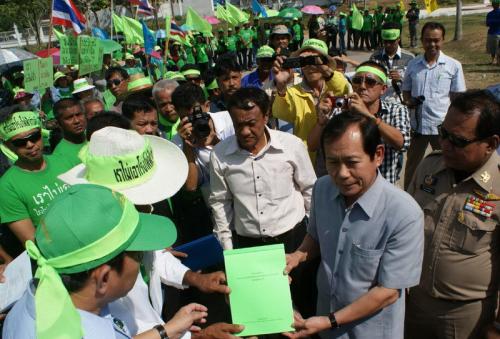 PHUKET: Krabi villagers staged a protest, across the bay from Phuket, yesterday in fear that a proposed coal-fire power plant would damage their health as they allege a previous one had.

The protesters wore green t-shirts and carried placards saying “Coal is killing us” and “Our ancestors built up this land, but coal is ruining it”.

Mr Chalit explained that the villagers traced health problems to a previous coal plant in their area.

“From 1964 to 1995, there was a coal power plant that made villagers sick – some people had respiratory conditions and some developed cancer,” he said.

“Eventually the plant was changed to a 300 Megawatt fuel oil power plant,” he added.

“Now the Electricity Generating Authority of Thailand is conducting an environmental impact study for another coal plant with 800 Megawatt capacity in Klong Kanan, in Nue Klong District.

“We cannot accept it. We should consider alternative types of power plants,” Mr Chalit said.

Krabi Vice Governor Saman Sangsaard received the protesters’ official letter of complaint and told them that the power plant “is yet to be built and still in the public hearing process”.

He promised to forward their complaint to Krabi Governor Prasit Osathanon and other relevant departments.