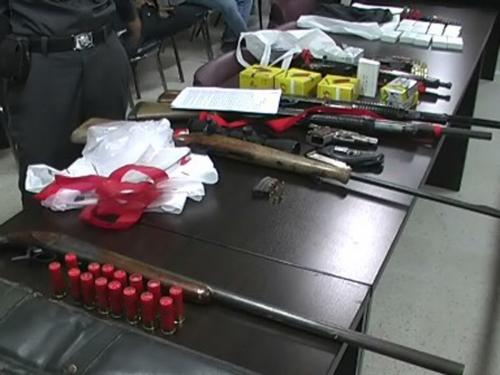 PHUKET: Police raids at a shrimp farm and the nearby home of a subdistrict chief (Kamnan) in Krabi province, across the bay from Phuket, has turned up an Uzi, a Thompson machine gun, six shotguns, several handguns and two grams of ya ice (crystal methamphetamine).

Anan is being investigated as the prime suspect behind the ambush that resulted in the death of local activist Paruhas Kongbannuek in July last year (story here).

Also presented by the police were shrimp farm workers Sanya Chaipim, 38, from the northeastern province of Sisaket, and Weerasak Songsaeng, 45, from Narathiwat in the Deep South.

Acting on allegations by local villagers that Kamnan Anan was behind the lethal attack on Mr Paruhas, police obtained a search warrant for his home in Khlong Khanan, Region 8 Police Deputy Commander Anuchon Chamart explained.

“About 50 officers took part in the raids. Many firearms were found at Kamnan Anan’s house, including an Uzi, a 9mm handgun and a .357 handgun, as well as ammunition and two grams of ya ice,” he said.

The police investigation also led officers to obtain a search warrant for two other homes in the area.

“At the two houses on the shrimp farm in Klong Khanan we found weapons and ammunition,” said Col Anuchon.

The cache of firearms discovered at the farm comprised six shotguns, a Thompson submachine gun, an 11mm handgun, two bulletproof vests and and ammunition.

In total, 681 rounds of ammunition were seized in the raids, Col Anuchon said.

“Mr Sanya and Mr Weerasak have both been charged with possession of a war weapon and matching ammunition, as well as illegal possession of firearms,” he said.

“The allegations by villagers pointed to Kamnan Anan being involved in the murder of Mr Paruhas, among other shootings.

“It was also alleged that he was behind the burning of villagers’ houses over a palm oil plantain conflict,” he added.

Mr Paruhas was the leader of a group of locals protesting a palm oil plantation operator in Khlong Khanan who had refused to vacate land earmarked by Cabinet for use by local residents, Col Anuchon explained.

“Police requested a search warrant for his house to help determine whether or not he was involved in the alleged crimes,” he said.

“All three suspects have been handed over to the Krabi Provincial Court for detention while police continue with their investigation,” he added.

Phuket Sports: The party that sails around and around