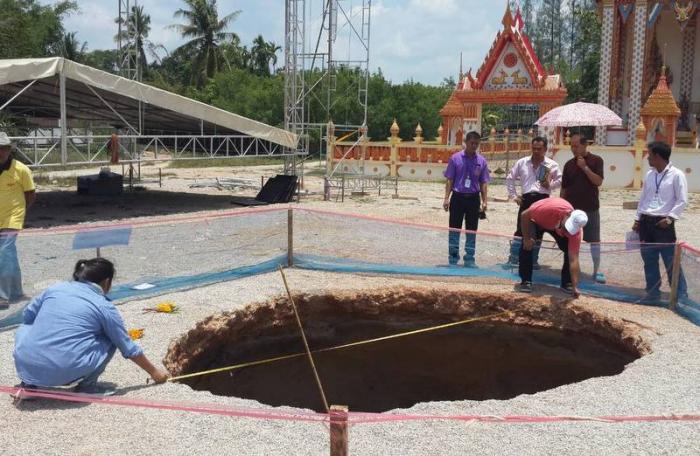 KRABI: Locals believe a serpent is the cause of a sinkhole at the Khao Phanom Temple, but officials disagree.

Officials from the Ministry of Natural Resources and Environment (MNRE) Region 4 in Surat Thani arrived to inspect the sinkhole last week. Their findings concluded that the hole outside the temple – roughly five meters wide and four meters deep – emerged because people have been using a lot of underground water during the drought season.

However, locals insist that the hole was made by a three-headed serpent-spirit, called a Naga, instead (story here).

“At this stage, we believe that the level of underground water is going down faster because of the drought season. With people using a lot more underground water, the dirt surface collapsed,” said Preecha Thongnual, head of the water resource department at MNRE.

Officials believe that the area was a waterway before the temple was built.

“Additionally, the area was used to host a local fair during Songkran. The weight of the the large congregation and the ground not having enough water pressure for support are likely reasons for the sinkhole to appear,” said Mr Preecha.

“However, we will continue with our inspections in order to arrive at a reasonable conclusion,” he added.

Even so, many locals are holding on the belief that the hole was created by a Naga.

Krabi local Banyen Ruangsil, 42, says she believes this is punishment granted by a sacred spirit because of the festivities that had been organized at the temple.

“I have gone to many temple fairs but this was different; dances were performed where a principal Buddha image is located,” Ms Banyen said.

“This is disrespectful to the beliefs of Buddhism,” she added. “I personally believe this is punishment.”