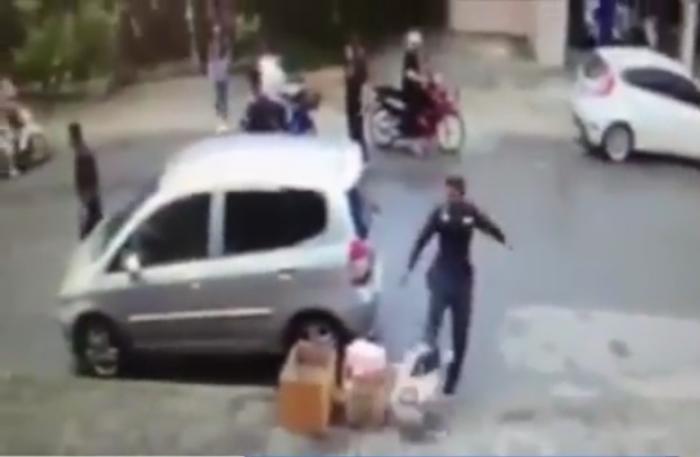 KRABI: A police officer and a ladyboy buried the hatchet yesterday after video clips of the two went viral on social media. In the clips, the pair are seen arguing over a minor road accident in Krabi Town, across the bay from Phuket.

On Tuesday, Facebook user Napat Sara Malaisanan uploaded two videos with the caption: “You want my friend to be responsible for that, police?”

The video showed the officer and his family falling off the motorbike on Chao Kun road in what appeared to be the policeman’s own fault.

He then proceeded to throw his helmet onto the asphalt and kick a box at the side of the road.

The 22-year-old ladyboy, Siriporn Solaem, works at her friend’s beauty salon in front of the site of the incident.

She had just pulled up to park her car when the policeman, Sgt Thannakrit Boonchoo, approached her and blamed her for the fall.

He added that she should accept responsibility and take them to the hospital for treatment.

Ms Siriporn maintained that she was being unfairly blamed.

The following day, Superintendant Col Sangob Jansing of Krabi City Police summoned the pair to weed out their differences, and they agreed that it was all just a “misunderstanding”.

Sgt Thannakrit also agreed that his motorcycle had “fallen over” because the road was slippery from rain.