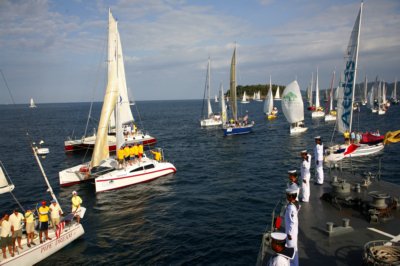 PHUKET: Before racing got underway in the 21st King’s Cup Regatta today, a royal sailpast was held to honor HM King Bhumibol Adulyadej’s 80th birthday. A majestic sight to behold as crews lined the 103 competing yachts chanting three cheers, doffing their sailing caps and some even singing Happy Birthday.

A parade of sail is an appropriate way for international sailors to pay homage to Thailand’s sailing royal family that have supported yachting events all these years.

The Racing classes continued on with two more windward/leeward races and the Cruising classes were duly dispatched on a passage race around Koh Hei and Koh Aeo before returning to the finish line off Kata Beach.

Frank Pong’s 75-foot Jelik proved once again they can win windward/leeward races and takes a commanding lead in the overall points with four wins to date. Stephen Reith’s Sydney 40 Foxy Lady III announced their presence with second place in Race 4 to relegate Ray Roberts’ DK46 Quantum Racing to third place by 40 seconds. Race 5 saw Quantum Racing reverse the order with Foxy Lady III to finish 2nd and 3rd, respectively, as well as in the overall points.

In the Sportsboat class, Scott Duncanson’s Phuket 8 Raimon Land has kept a clean sheet until now, with five consecutive wins. Japan’s Keisuke Nagamatsu on Platu 114 keeps plugging away, exchanging second and third places with Kevin Scott’s The Weasel and Morten Jacobson’s Emma Mathild XX to be the best of the rest.

Peter Cremers has steadily been improving Shahtoosh positions in the Premier Cruising class and managed to pull a win out of the bag in passage Race 4. Geoff Hill’s Strewth has consistently scored second places on the last three races to retain second overall. Third place for David Ross’s Swan 53 Frangipani Girl has all three boats tied on nine points going into the final races, which may have to be decided by dropping each boat’s worst race score.

In IRC 1, Jeff Davidson’s Mumm 30 Panic retained their composure to score two wins on the trot and head the leaderboard. Sail in Asia’s Farr 43 Switchblade with the Irish Green Team on board are on the pace with second and sixth place to be amongst the leaders going into the final rounds.

Bunlou Pitphirom’s Fi Tuen has been up and down the scoreboard, but two well-earned third places will keep the crew happy. After drifting away on the first night, Toshio Furuta’s Emma took second place in Race 5 to make up for the unfortunate incident.

Peter Dyer’s Madame Butterfly spoiled their clean sheet in IRC 2 with a second place in Race 4, but resumed their winning ways in Race 5 today to lead the class. David Lindahl’s Swan 42 La Samudra bounced back with first and third places to sneak back into the running for top honors.

Lt Cdr Peera Sagultem’s Royal Thai Navy 1 scored fifth and second on the royal birthday and proudly gifted it to the King. Michelle Pippen’s third place on Tropic Bird has them popping occasionally onto the podium.

Three wins in a row for Fredrick Roswold’s classic IOR racer Wings has them well and truly in the lead overall in IRC 3. Second place for Dr Basil Diethelm’s Swan 44 Sarabande puts them in second overall with allot of work to do if they want to improve their standing. Third place for Richard Vine’s classic Patrice III is a stitch in time and along time between podium celebrations.

In the Firefly one-design class, Henry Kaye stayed on the pace with Mamba to record their fourth consecutive win and go to the top of the class. After Roger Kingdon’s retirement from yesterday’s race, he had Moto Inzi back on the water to score second and third places today.

Andrew Marshal’s Pink Lady returned with second place in Race 5 today. Following the collision between Bill Phelps’ Twin Sharks and Peter Dyers’ SEA Properties yesterday, parts and pieces will be transfered to get Twin Sharks back out on the race course again.

Tim Milner’s Seekronghuk came from behind to win the Multi Racing class today, which puts a cat amongst the pigeons in the race for top honors in the class. Richard Simson’s new Corsair Dingo is on a charge to score second place.

Third for Dave Wales Corsair trimaran The Sting keeps them in the overall running by exerting pressure on Peter Ball’s Summersalt, which finished fourth but still holds a slim lead in the overall standings.

Daniel Schwalb on Mont Clair improved on second place yesterday to first place today in the Bareboat class. Scott Jacobsen’s Amadeus leaped back into contention with a second place. Japan’s Hironori Kobayashi on Fidji finished third today, but the win in Race 2 keeps them at the top of the class.

Cop shoots self by accident