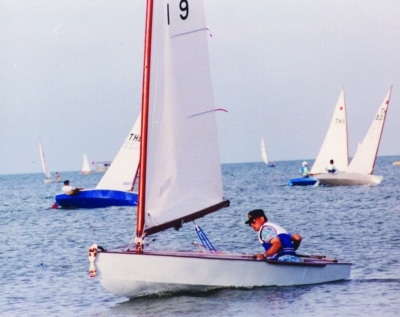 If it were not for His Majesty King Bhumibol Adulyadej being a keen yachtsman and master craftsman of sailing dinghies, the Phuket King’s Cup Regatta would not exist and would not have become Asia’s largest sailing event.

In 1965, HM The King introduced dinghy sailing to the Kingdom. Having learned woodworking skills as a schoolboy in Switzerland, he turned his hand to boat building – a passion that he indulged in with long-time associate Prince Bhisadej Rajani when free from his royal duties.

In the space of a few years, HM The King designed, crafted and sailed seven boats in all, the first being a dinghy made to International Enterprise Class specifications and aptly named Rajpatan (Royal Patent) and registered as dinghy number E 11111.

His Majesty proved the dinghy himself on the pond at Chitralada Palace in Bangkok, where he had converted one of the palace rooms into a workshop to build the boat with Prince Bhisadej.

The new boat weighed 95 kilograms, was four meters long and about 1.5 meters across at its widest point. On his first outing on Rajpatan with Prince Bhisadej as crew and coach, HM The King demonstrated a natural flair for sailing with the skills of an experienced sailor. Carrying out a perfect gybe on one of the dinghy’s first Chitralada Palace pond trials, His Majesty remained high and dry while the maneuver left his royal helmsman behind in the water.

A year later in 1966, a visit from first-class sailor the Duke of Edinburgh, HRH Prince Philip of Great Britain, was cause for a regatta at the Royal Varuna Yacht Club in Pattaya. The 27-strong fleet raced around Koh Larn for the royal race. Prince Bhisadej, paired with HM The King, finished first on Rajpatan.

Prince Philip is said to have had a most enjoyable outing with HM The King and upon returning to England, the duke shipped a catamaran to the king, the first of its kind to enter Thailand. His Majesty named the boat Pladuek, a play on words with the Thai word for catfish, “cat” for catamaran and “duek” as in duke.

Hooked on dinghy design and sailing, HM The King also built an OK Class dinghy, naming it Vega 1, which he single-handedly sailed 60 nautical miles from Hua Hin to Toey Harbor in Sattahip, in a testing 14-hour journey.

Inspired to come up with his own unique design based on the Mod class that would better fit the Thai physique, HM The King created the three-meter Super Mod V. The smaller-than-usual design of Mod Class dinghy was at first looked upon with skepticism, but later proved to be a winning adaptation.

The Super Mod V was later accepted as an official class in the 13th Asian Games in 1985 and sailed the Thai team to victory in that year. Sailing HM The King’s new design, Thailand won all six races in the games, plus a gold medal for that class.

HM The King’s eldest daughter, HRH Princess Ubol Rattana, also shares her father’s passion for sailing, which has seen the royal father-and-daughter team win medals for their country. Between them, HM The King and Princess Ubol won gold medals for their nautical skills when they sailed under the Thai flag in the single-handed OK dinghy section at the fourth Southeast Asia Peninsula Games in Pattaya Bay.

The gold medals were presented to King Bhumibol and Princess Ubol by Her Majesty Queen Sirikit at the National Stadium on December 16, 1967. The date marked the birth of Thailand’s National Sports Day in honor of the king.

As the pressures of royal duties increased for a monarch so dedicated to his country and people, boat building and sailing soon became activities that he didn’t have the leisure time to pursue.

In November 1967, HM The King produced a Moke, the last of the seven sailing boats he built, but he was rarely seen sailing after that.

On the rare occasions when he joined friends on the water, sailing was one of those royal pursuits where formalities were usually put aside and playful banter was the order of the day. HM The King has always been admired by his people for his many creative talents. Not only did he feel at home in the workshop, HM The King is also an accomplished jazz musician and composer, photographer and painter.

As with many of His Majesty’s creative and athletic hobbies, HM The King has encouraged his people to also follow such pursuits.

Following his lead, the nation has embraced sailing and it has become a popular sport.

HM The King granted royal permission to the Royal Thai Navy Sailing Club to manufacture the Mod and the Super Mod designs to be sold at reasonable prices so more people could enjoy the pleasures of a sport that puts man at one with the elements. He also founded the Royal Chitralada Yacht Squadron, while the Royal Varuna Yacht Club received His Majesty’s royal patronage.

The King’s Cup Regatta was inaugurated in 1987 to celebrate the 60th birthday of HM The King and has been held in his honor every year since.