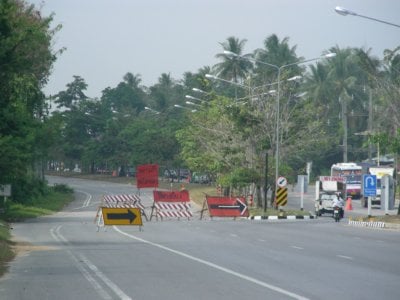 MAI KHAO: Roadworks to make the notorious Kho En “death bend” on Thepkrasattri Rd safer are about 40% complete and the section of road should be ready by the end of February, Saroj Suwinchai, director of the provincial office of the Highways Department, has told the Gazette.

The Kho En curve is a notorious blackspot that has been the site of several traffic accidents. One fatal accident resulted in the death of a local woman, sparking a protest by Kho En villagers who blocked the road for hours until senior government officers pledged to make the curve safer.

The road is the only thoroughfare on and off the island.

“The new curve will be about 440 meters long. We are reducing the sharpness of the curve to make it easier for drivers to navigate,” said K. Saroj.

“Completion of the curve is dependent on there not being heavy rains in the next few weeks,” he added.

“In the original contract between our office and private company Chaiyakorn Co Ltd, it was agreed that construction would start June 28 and be completed by December 24, 2007 – 180 days.

“However, a new contract had to be drawn up, extending the date of completion by 60 days because there was a delay in acquiring the land,” he added.

The roadworks will cost a total of 15.1 million baht, he said.

While the roadworks are being carried out, northbound motorists must share the southbound lanes so workers may continue working safely.