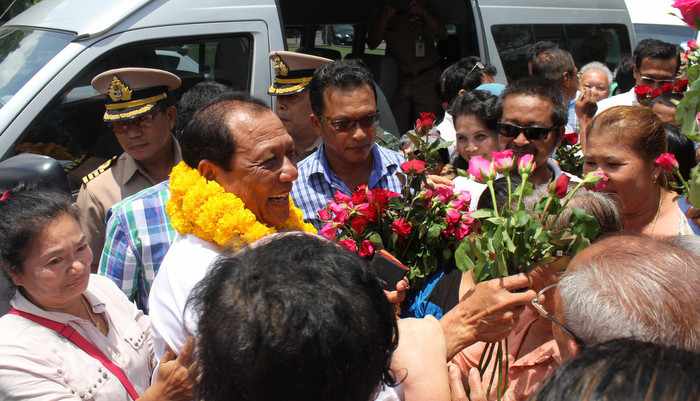 PHUKET: Former Patong mayor Pian Keesin, two of his sons and five others wanted for their alleged role in taxi mafia activity on the island were denied bail by police today.

Patong kingpin Preechawut “Prab” Keesin announced on his Facebook account on Thursday that he would turn himself over to the authorities on Monday [today], but did so at the Bungkum Police in Bangkok (story here). Officers then transported him to Phuket.

Mr Pian and six others turned themselves in shortly after Mr Prab was taken into custody in Bangkok.

“We have denied the suspects bail for the time being, as we need more time to gather the relevant documents and put them in order. Once we have completed our investigation, we will consider allowing them out on police bail,” Region 8 Police Deputy Commander Paween Pongsirin said.

All the suspects are being held at Phuket City Police Station.

“I don’t understand why the police will not allow my clients to pay bail. I believe they are making up excuses to hold them longer than necessary,” Nituch Prasertnetikul, the Keesin family lawyer, told the Phuket Gazette.

The three members of the Keesin family, as well as five members of their operating company Pisona Group, are facing charges of extortion and criminal activities carried out by a criminal association.

No hotline for Phuket’s roaming metered taxis – yet